Last week should have been a golden week for the USD. Janet Yellen at the Humphry-Hawkins Testimony seemed comfortable with the current state of employment (while handling questions from Congress about the ever-growing skill-mismatch in the economy), a core of the Fed’s dual mandate approach to managing monetary policy. At the same time, the Consumer Price Index showed that the Fed is above their 2% target, meaning that we have practically zero constraints for the Fed to move forward with their plan to continue hiking rates as shown via the Dot Plot.

However, it’s been telling to see that 2-year yields have been fixed at nearly 1.2% since December when the DXY peaked along with other USD pairs. The 2-year yield is a helpful proxy of what the bond market (who has earned the moniker, ‘the smartest people in the room’) sees a limit with how much the Fed will actually act despite the Dot Plot as they’ve underwhelmed markets before.

Another key tenet on the yield curve that has received a lot of attention post-Election is the 5-year yield. The 5yr is seen as the proxy for growth from the Trump Administration policies at least from the angle of promised new trade deals to put America first and a Roosevelt-type form of Fiscal Stimulus to put Americans to work in quality jobs. However, the Bond market seems also to see the upside is currently capped given the current publicly available information.

Add to the developments above, and we’ve recently had cross-fire comments from Treasury Secretary of the US, Steven Mnuchin who characterized the relatively strong dollar as a ‘good thing. What was more impressive or telling to many in the market was that Mnuchin felt that the US will probably have low rates for a long period. Mnuchin’s view was overshadowed by the FOMC minutes that said some members were concerned that the relatively strong USD could limit price stability and reduce the ability for CPI to remain above the 2% target.

Recommended Reading: The Saga of USD Congestion Continues, For Now

Today’s technical focus will be on the Andrew’s Pitchfork, which is drawn over the Ichimoku cloud. You can see that price is trading within the Ichimoku cloud. That tells us that Price is currently trading at a level between the 52-period midpoint and midpoint of the 9-&26-day midpoint from 26-periods ago. While that may sound confusing, the key idea is communicating that price lacks Bullish Momentum.

The Andrew’s Pitchfork shows that the price is currently trading within the lower-quartile of a rising channel. Price within a rising channel is Bullish. However, we need a move higher off of trend support, which is the rising bottom red line for there to be confidence is a resumption of Bullish momentum and a reversal of the current corrective/ Bearish momentum.

For now, we’ll keep an eye on the February high of 101.76 as a break and close above this level would be a helpful sign that the USD is regaining favor. Absent a break above 101.76; we’ll be on the watch for a retest of the rising trend support line near 100. Price action near here would help clarify forward guidance. For now, both Bulls and Bears are left wanting and waiting for a catalyst as USD drifts in search of a trend. 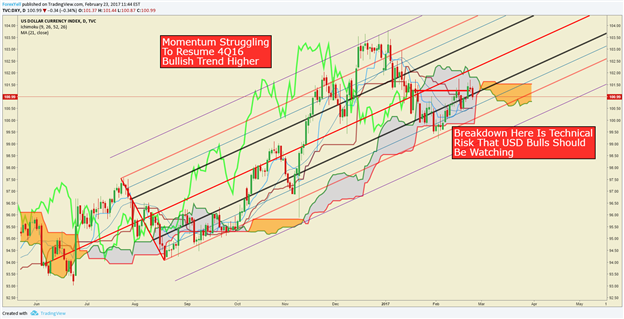