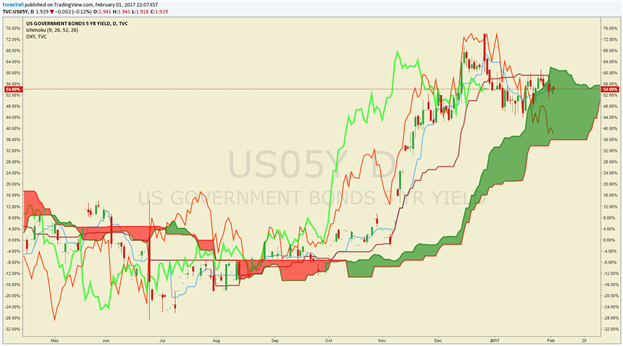 Dollar Technical Analysis: The Week That Could Have Been For Bulls

Friday’s job reports may have delighted those watching the headline numbers for US economic growth prospects, but the details were not as cheery. The Bureau of Labor Statistic in the U.S. showed there was little compelling evidence of wage pressure, which is a kick-off point of inflation measures that could kick the Fed toward their anticipated three hikes per year over the next three years.

I’ve long warned, alongside colleagues that traders should be keeping an eye on Treasury yields, specifically the front end of the curve like the 2y-5y USTs. These Treasuries help show how the market is pricing in/anticipating an aggressive Fed as a belief of higher interest rates at the hands of the Fed would lead to a sell-off in current, relatively low-coupon paying bonds, which would push yields higher. Conversely, a disappointing or increasingly uncertain economic environment that is perceived as not conducive to rate hikes would like to less anticipation of rate hikes and favorable economic environment of growth/ inflation, which would push Treasury Yields lower.

The chart below shows the overlap between the 5-year yield and the DXY. The 5-year has specifically caught the attention of both hedge funds and major non-speculative financial institutions that have conflicting views on the direction of yields. Per the late January CoT report, Hedge Funds are heavily positioned for a Treasury rate price sell-off and yield uptrend whereas non-speculative financial institutions are anticipating tepid growth that would align with falling yields.

In December, we stated that the DXY over-extension was the biggest hurdle. Surprisingly, that article marked the high price for the following six weeks to today. Now, we’re nearly looking at the mirror opposite of the mid-December price action. It is fair to ask whether or not the USD has fallen too far, and as you can see below, we’re sitting and not making a lot of further ground at major trend indicator support.

There are multiple reasons for the lack of USD strength. But those reasons are fundamental and the technical focus I would direct you to would be the stalling of momentum at chart support. A failure for momentum to regain downside traction would alert me that at best for the Bears, a retracement was coming, and at worst for the Bears, a major turnaround could be around the corner.

Ichimoku + Andrew’s Pitchfork shows us sitting at an inflection point, where a move that could influence directional bias is likely. I would also follow momentum via RSI(5) on the Daily Chart or the lagging line of Ichimoku Cloud. If the Lagging Line (Bright Green on the chart) breaks below the cloud alongside price, it could show that more downside is possible. However, if we remain above 99 (highlighted rectangle), and momentum rebounds higher, I would not want to hold a short trade with my enemy’s money. 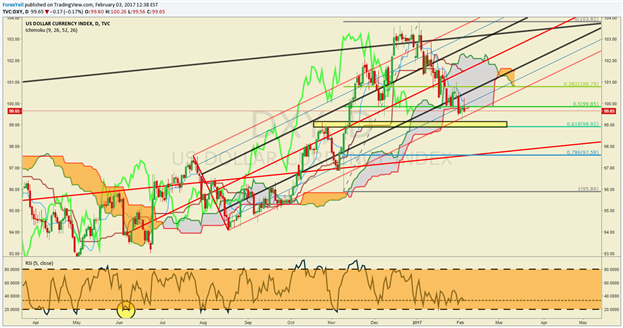