-GDP and durable goods are the upcoming data highlights

The US Dollar as illustrated by the Dollar Index or DXY has come back to a key polarity point similar to what we earlier pointed out in Crude Oil. There is a lot of confusion about the political landscape as Donald Trump has come into the US Presidential Office signing multiple executive orders. Many of the orders have expectedly been met with resistance from Congress with the notable Tweet from John McCain, the 2008 Republican Nominee providing a sample who said, "@POTUS can sign whatever executive orders he likes, but the law is the law,” This was said in response to an interrogation order.

While announcements will continue to come, it’s difficult to see with clarity what will come through and what will be voted down. Either way, you look fundamental landscape of trade and capital flows as well as Trump’s potential inflation-inducing policies that could keep the Fed’s finger on the proverbial trigger, there is a great deal of uncertainty. Markets are always uncertain as Risk is properly defined as an uncertain outcome. However, what’s unique is the confidence of higher inflation that took the USD higher that was seen in Treasury yields that we closed out trading in 2016.

An unraveling of the confidence can similarly shake the USD Bulls. While the US has a definitive monetary policy edge, and everyone loves to discuss the strong USD, which could still continue to strengthen, it’s worthy to note as shown in the chart below, that as of January 25, the DXY is trading at similar levels to March 2015.

Naturally, there has been a lot of volatility since March 2015, but it’s fair to say that there are forces that appear to be limiting USD strength. Last year, there was the talk of a Shanghai Accord that was a supposed Plaza Accord 2.0 that was designed to keep a cap on the USD. Now, let’s look at the charts to understand the momentum and support that is at the core of the DXY analysis.

Technical Picture: If (big if) we begin to see a break below the Ichimoku Cloud and the Andrew’s Pitchfork exterior parallel on a weekly close basis, it would be very difficult to carry the torch for the DXY-bull camp. The next level to watch would be a weekly close below the 99-level where a breakdown from here could bring a washout of current long positions.

A breakdown below the 99-level would take us below the 50% retracement of the August-January range. The price level, 98.95 was also the closing high in October, and a breakdown below this level may open the door for a test of the 61.8% retracement of the August-January range at 97.80, which would be triggeredby a strong move higher in EUR, GBP, or JPY.

If we get the breakdown, the closing quarter of 2016 could go down as a major bull trap, and a weaker USD could fundamentally change the way many asset managers are positioned in early-2017. However, if DXY can hold above the ~99-level, and we eventually break back above 101/103 zone, the recent pull-back to start 2017 may go down as a bear trap that would inflict pain on those with short-USD exposure (including trillions of off-shore borrowed USD.) Either way, there is uncertainty ahead, and it appears the sideways price action is coming to an end.

We could be looking at a favorable period of keeping your powder dry and being able to jump on the trend that comes through the fire, whether it be bullish or bearish.

D1 DXY Sitting Near Prior Resistance, A Breakdown Likely Changes The Landscape 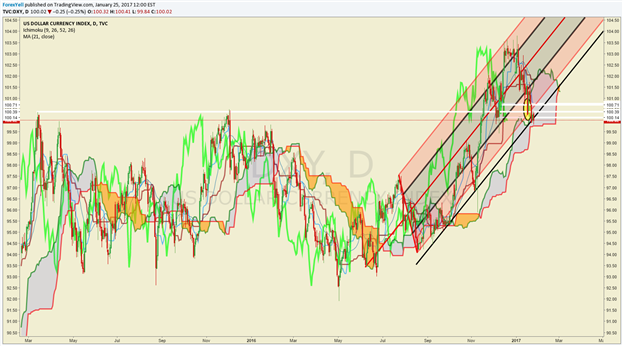