- US Dollar May Fall Further as Trump Inauguration Nears

The “Trump Trade” continues to unwind keeping the USD soft, as it’s fair to now wonder if all the good news was priced into the USD, which is why DXY cannot extend into new 14 year highs at the start of the year. The rates market remains a crucial component of any credible DXY narrative, and we continue to see a pull-back despite sovereign yields on the front of the curve sitting below the Dot plot expectations. Traders appeared disappointed with the lack of details from Trump's press conference ahead of the Inauguration Speech coming on Friday. The uninspiring Retail Sales on Friday likely adds to the lack of encouraging data to keep USD Bulls busy.

The lack of traditional economic data this week will continue to give the downside in USD further possibility as Yellen and other Fed speakers are unlikely to provide a spark for USD Bulls, which means USD remains vulnerable. The chart currently shows a series of lower highs against channel resistance and the H4 Ichimoku cloud in much the same way the XAU/USD traded ahead of the election before a significant sell-off that nearly put Gold into a bear-market after a stellar H1 2016.

The DXY appears to be taking a backseat to commodity currencies, like AUD, CAD, & NZD, which all remain well positioned for further catch up vs. falling currencies like the USD and GBP. The recent move lower to round out the opening range of 2017 took DXY to the 38.2% retracement of the post-election range. While strong-trends often find support in such a zone, it’s difficult to put too much faith that the move down to the December 14 low of 100.73 was the end of the DXY correction. To believe USD is done slipping, we’d want to see a strong move with price comfortably above the Ichimoku cloud.

The point to watch on the chart is the low from last week as well as the December 14 low of 100.73. A break below this zone would take the price of DXY below the 38.2% retracement of the post-election breakout as well as the median line of the current corrective move lower that has opened 2017. If we fail to move above the channel resistance and Ichimoku Cloud, there could soon be a strong break below the December 14 low to the December low of 99.43 and likely toward the 61.8% retracement of the same range at 98.89. It would have been difficult to imagine questioning the uptrend a few weeks ago, but we find ourselves asking if the market went “too far, too fast,” and now the search for equilibrium means the USD has more room to the downside. 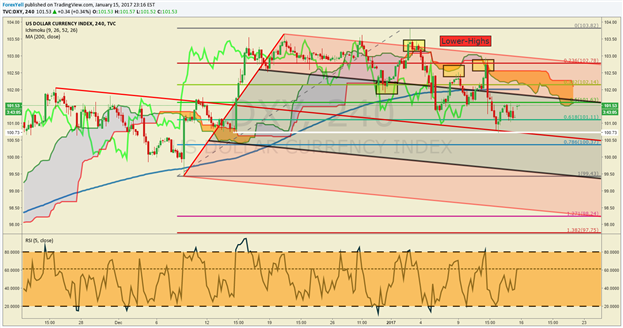