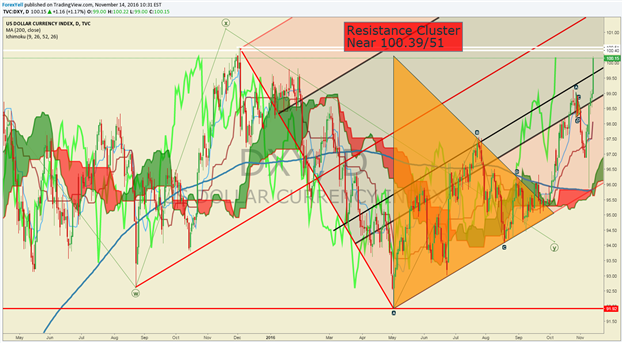 The Dollar strength has brought EUR/USD to fresh 2016 lows and USD/JPY to the 38.2% retracement of the 2015-2016 range and above its 200-DMA. The move could continue as longs of massive fixed income exposure begin to panic ahead of what could be an inflationary administration under President-Elect Trump.

The volatility is not helpful in the world of hedgers and corporate financiers. In short, the USD is the currency that underpins global commodity markets and many international debt markets.When we get strong moves higher in the DXY, there is often a strong move in assets that are securitized, which can and has caused immense pain for collaterlization. As we’re seeing aggressive repricing on the Fed Funds Rate, we’ve also seen the cost of 3-month USD borrowing as per the ICE 3M USD LIBOR move to 91bs, which is the highest since April 2009.

The options market against major components of the DXY shows protection is being bought aggressively against further USD strength. One-year 25d risk reversals continue to fall sharply aggressively as put premiums to calls are at their highest level in more than four months per Bloomberg data.

The price of DXY (USD Index) has traded to the highest level in 9-months. The level worth focusing on is the 100.51 level that was hit before the Federal Reserve raised their reference rate in December 2015. However, the technical picture developing (to be discussed below) may be unfolding that an aggressive breakout could be unfolding that takes us above the December ’15 high and into levels not seen since summer of 2003 as the USD was coming off its hiking cycle in the late 1990s.

The chart above shows the sharp ascent of DXY from Wednesday morning lows. The last time we saw such an aggressive move was Q4 2015 as the Fed began to prepare the market for a rate hike. At the time, the Fed was preparing for a series of hikes as we saw in the December Dot Plot, which looked at an average of a 50-100bp rise in 2015. With one FOMC meeting left, we’re looking to be stuck with one. However, 2017 may be a different story.

In the aftermath of the electoral victory for President-Elect Trump, we’ve discussed many of the factors that could breed consistent USD gains as we saw in H2 2014. The technical picture also has a development worth considering that also argues for further strength.

Elliott Wave analysis shows way could be a completion of a double-three (W-X-Y) corrective or countertrend pattern that may have exhausted at the end of September. The corrective pattern looks to be composed of a Flat-Zig Zag-Triangle pattern that is now giving way to an aggressive advancement of the trend higher. Other indicators like Ichimoku & the Andrew’s Pitchfork price channel help to draw a price frame and support around the strong move, but the idea to take away from the potential Elliott Wave count is that we’re working on an impulsive advance that will be painfully and possibly a futile fight.

The last note is to keep an eye on the components of the DXY. The price pattern of USD/JPY may be tracing out a double-bottom with the price breaking above the neckline of 108.32 on Monday morning. Such a development would indicate further strength in the USD and weakness in counterparts to the USD like the EUR & JPY.

A long-held question has been when would the market take the Dollar direction out of the Fed’s hands. It’s possible the Trump Presidency that starts in late January could do just that, and one of the first signs would be a clear break above 100 on the DXY, which the charts currently favor.