News Flash, Hedge Funds apparently still hate the US Dollar. At least, as per the CFTC Commitment of Traders report that shows the percentage of bulls in lowest in the US Dollar in G10FX. Surprisingly, the institutional speculators would prefer to sell US Dollar than the British Pound ahead of the historic EU Referendum on June 23 that may result in a ‘Brexit.' 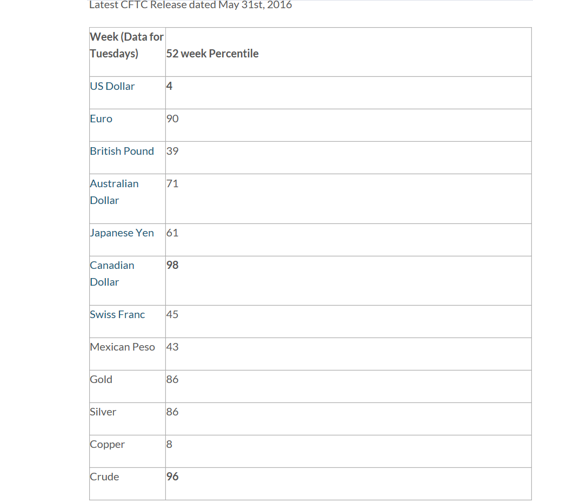 However, as a technical-based Trader, we have closed the window for the opening range of June, which I denote as the first 5-full trading days of a month, with a wide range and an equally wide range of possibilities from here. From a fundamental perspective, the optimism in the last half of May regarding an imminent Fed rate hike has all but dissipated after a pathetic Non-Farm Payroll on June 3.

The US Dollar has weakened for June’s open but, June isn’t over yet.

Multi-Year Weekly Chart on US Dollar

The chart above shows how aggressive the move higher has been since the 2011 low. The recent move down from the ~13-year high in January has brought us back to bullish price channel support. While it is difficult to make heads and tales of short-term price action on the chart above, the main takeaway is that a break higher, and specifically above 12,000 could show an aggressive resumption of the bullish trend.

Given the macro backdrop of decreasing expectations of a Federal Reserve Rate hike, a hold of the 12,000-price ceiling and break below the May low at 11,672 could be devastating for US Dollar Bulls. Such a development would validate the argument that the bull-run from July 2014 to January 2016 was built on false premises of multiple rate hikes that were never supported by economic data and we could be on our way to a larger correction.

While a lot of macro pivots will take place over the rest of 2016 such as the EU referendum, US presidential election, and further clarity of the Fed’s intended rate path, it seems fair to say that we could retrace anywhere from ~50-61.8% of the 2014-2016 price range. Such a move would take us down to 11,325-11,095 respectively.

What Will The June Opening Range Breakout Bring FX Traders?

The opening range of June was a wild one. We had a 200 point range with an ATR(5) hovering around 60 points at the beginning of the month. While the last few days have shown us retracting the bear move to open the move, there are a few key developments and levels to be on the watch out for the next few weeks as we endure the EU Referendum on the 23rd and the FOMC Rate announcement on June 15.

The opening range low is 11,798 while the opening range high is 11,998. These levels bracket sentiment perfectly as the key resistance we’ve been watching (highlighted on the chart above) is the 12,000 zone where we’ve seen many pivots since topping out in late January.

As dire as the fundamental picture has become for the greenback in terms of expected interest rate hikes (a fundamental driver of currency strength), a break above the 12,000 zone would turn all attention to further US Dollar upside.

There appears to be significance around the 11,800 zone, which is ~61.8% of the May range and also the previous resistance of the corrective price channel (red) shown in the chart above. Therefore, the hold of that zone was a short-term bullish development that has resulted in a push of ~11,900 where the Weekly Pivot resides. Further, a break below this level would be a blow to the US Dollar bulls that were just beginning to regain confidence.

Either way, given the event risk coming up, we can expect whichever opening range level breakout we receive will bring out an aggressive follow through.