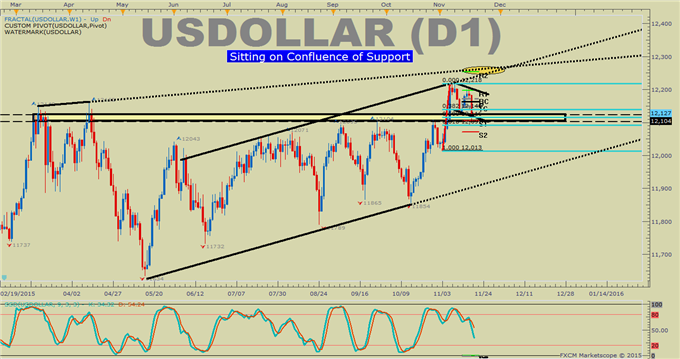 US DOLLAR Technical Analysis: USD Drops Most in 1 Month

The US Dollar index dropped the most in one month as the FOMC minutes were digested and led traders to believe that the rate hike path would be more shallow than previously thought. Given the lack of momentum of US Dollar since the November high of 12,219, we could see a bit more downside in the short term. We would only anticipate acceleration if we broke below the November Opening Range / Higher Low of 12,013. Above that level, there is still technical and Intermarket arguments for higher prices, and much higher at that. The Intermarket support comes from US 2yr. Treasury Yields that are pushing above their highest levels since April 2010 and the Eurodollar futures contracts, which is a proxy for short-term (3-month interest rate expectation) US interest rates on non-secured USD based international deposit accounts. The 2-yr yield and Eurodollar futures are both favoring further dollar strength, and as a positive correlation to USD strength, this would favor further USD upside if this relationship holds.

In strong uptrends, which US Dollar would quality as since October 15th, the first key level of support utilizing weekly pivot points is the S1 level at 12,106. A hold above the S1 indicates the larger multi-week trend is in force and only when the S1 is broken, and the S2 hit can the trend be in full doubt. The US Dollar did break below previously mentioned support at 12,127, the March 13th close, but that is still above the S1. Additionally, today’s low was near the 50% retracement of the November range, which is 12,013-12,218. While a deeper retracement that expected is in the works, the US Dollar is still in an environment that could see a resumption of the uptrend. That view would be validated on a break of the corrective lower-high at 12,206 on Wednesday, November 18th.

Yes, we are trading lower after the FOMC minutes now that the pace is expected to be slower than first anticipated. However, it pays to be hesitant to call a top due to the risk: reward nature of favoring strength continuing and looking for unbalanced strength: weakness profile to trade. Given the chart and the macro story, US Dollar appears to be favoring a bull flag in a relatively small three wave corrective move into a 50% retracement before moving higher. Only a break below the November opening range low would put me in the short-term top camp, but I’d feel better still if the UST 2yr yield dropped as well as Eurodollar futures followed suit.