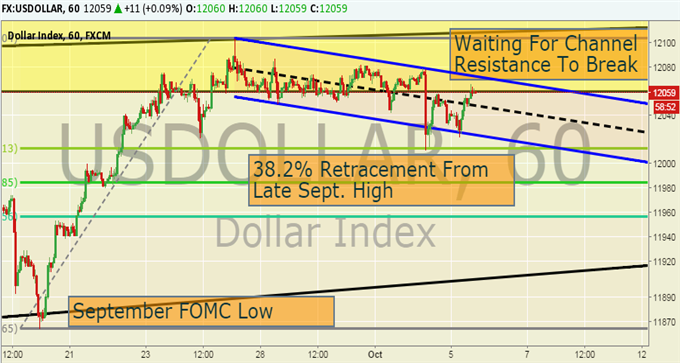 A peculiar divergence has begun the week. In short, USDollar lies in the middle of a sell-off of major currencies like GBP, JPY, and EUR, and an aggressive bid in Commodity FX. Much attention is being paid to the seasonal studies suggesting USD weakness is upon us, and a break below the 38.2% retracement at 12,013 could be the first validation of that view. However, if the USDollarcan catcha bid from a fundamental perspective, the March 13th, 2015 Daily Range of 12,064-12,149 will likely be tested and broken given the consecutive higher lows.

On a shorter timeframe, the USDollar recovered most of its NFP sell-off. So far, today’s low of 12,023 was a higher low from the prior move down to the 38.2% Fibonacci retracement of the September 18th-September 25th range. If support near the 38.2% retracement at 12,012 continues to hold, the bias will remain higher for US dollar. Patient traders may prefer to see a break of the equidistant corrective channel, currently near 12,075. Because we’ re within the opening range of Q4, volatility is expected, USDollar is expected to keep up the trend of higher lows on its way to new multi-year highs. Only a break below 11,865, the September low would change that view in the medium-term.

After a gap lower on the open, USDOLLAR looks set for another retest of the March 13th range. The main issue has been what the catalyst will be to take the market to and potentially through that zone. Currently, other central bank’s dovishness seems the most likely cause but that is pure speculation. We’ll watch for a break above the pre-NFP high around 12,079 to turn the near-term focus higher. The first target zone sits between the September highs of 12,095/104 followed by swing targets at 12, 162 (YTD / April 13th high) with stops below Friday’s low of 12,012.