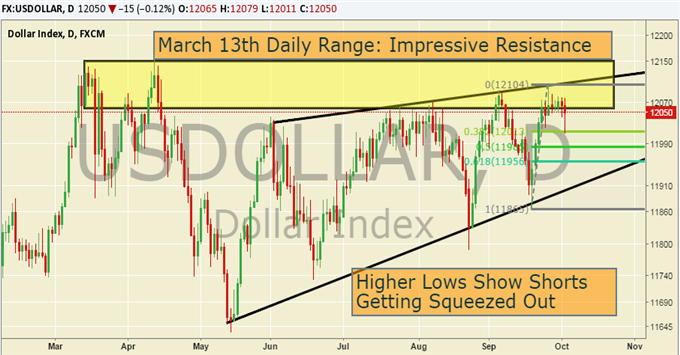 The US dollar faced a big test, and by first measures look as though it failed. In short, coming into the important resistance of the March 13th, 2015 range, we approached a big fundamental test of the USD with monthly payroll numbers. The number of 142k jobs added versus expectation around 200k along with lowered revisions severely cuts chances of a Fed Hike and thus caused immediate dollar weakness. However, if the US is catching a cold from a fundamental perspective, the rest of the global economy is downright sick, and the USDollar may still end the month higher.

On a shorter timeframe, the USDollar invalidated the view of a running triangle but not of a correction. So far, today’s low was on a move down to the 38.2% Fibonacci retracement of the September 18th-September 25th range. If support near the 38.2% retracement at 12,012 continues to hold, the bias will remain higher for US dollar. Patient traders may prefer to see a break of the corrective channel, currently near 12,070. Because we’ re within the opening range of Q4 volatility is expected but the dollar doesn’t appear ready to give up its reign just yet.

Spikes tend to excite crowds but are privy to be head fakes on the charts, especially when they are a counter trend spike. On USDOLLAR, a break above the pre-NFP high around 12,079 would put longer term focus higher. Easy targets sit toward 12,064 (March 13th high) followed by swing targets at 12, 162 (YTD / April 13th high) with stops below today’s low of 12,012. While resistance is firm, we have a series of higher lows dating back to June that argue there is less and less confidence on the downside.