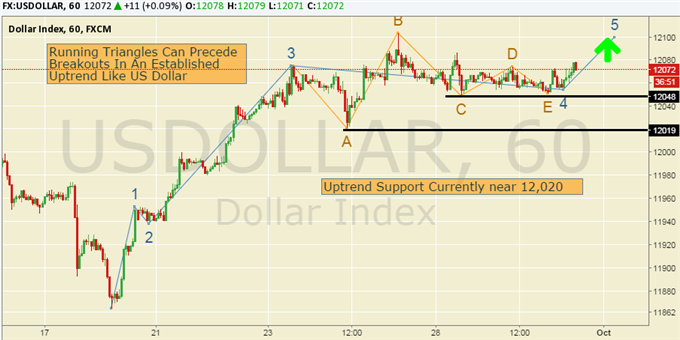 The US dollar has ended 3Q2015 in a sideways crawl. As recently mentioned, this is significant given where the crawl is taking place. In short, for the last week of September, the US dollar index has begun a sideways correction into the lower-end of the March 13, 2015 price range of 12, 049 – 12, 164. It’s worth noting, that this range has held price down for over half of 2015 and looks to be the last technical lid of resistance before a very aggressive and painful breakouts that would see commodities, emerging markets, and certain equities feeling the pinch even further.

On a shorter timeframe, the USDollar index looks to be tracing out a running triangle. This triangle is the first consolidation of note after the significant higher low was printed on September 18, after a two-week drop from the September 4 Nonfarm Payroll high of 12,094 that we recently broke. Triangles are typically seen as consolidation patterns that favor the prior trend, which in USDollar is higher. If support near 12,020 continues to hold, the bias will remain higher for US dollar and focus will be on a daily and potential weekly close in early October above the March 13th range.

Consolidations are a favorable place to enter on a risk: reward basis becauseyour stop is close to your invalidation point. On USDOLLAR, that level for me is 12,020. The issues with entering during a corrective move is at the timing of the continuing move is less probable and therefore the trade can incur opportunity costs as well as a lower probability of playing out appropriately. Therefore, I prefer to wait a breakout above corrective resistance of the current short-term pattern around 12,080 continuing to keep stops tight below the recent higher low at 12,050 and then moving stops to break even on a close above 12,064 (March 13th high). In that instance, short-term targets would be 12, 162 (YTD / April 13thth high).