FTSE may be in process of building bull-flag

The FTSE is trying to find its footing and with general global appetite, especially in the U.S., remaining relatively solid, we could see the lagging UK index make its way higher at some point. It will take some more time to develop, but a bull-flag pattern may be in the works.

Bull-flags are not to be acted on though until they are confirmed as a pattern – bottom-line, don’t anticipate their development, rather react to the breakout once formed. The trigger of the formation is a breakout above the trend-line running off the June high over the July high. The underside parallel is the June low and thus far the August low. Price could drop a little lower into the line and still hold up.

To confirm the pattern, a run and break of the top-side trend-line is needed. Crossing 6323 (July high) will further confirm the break as well. Should we see an eventual break, then a run at the December 2018 low at 6536 and better could be in the works.

For traders looking to play the developing pattern within its confines, turns off the lower and upper thresholds could offer near-term fade-trades within the congestion. 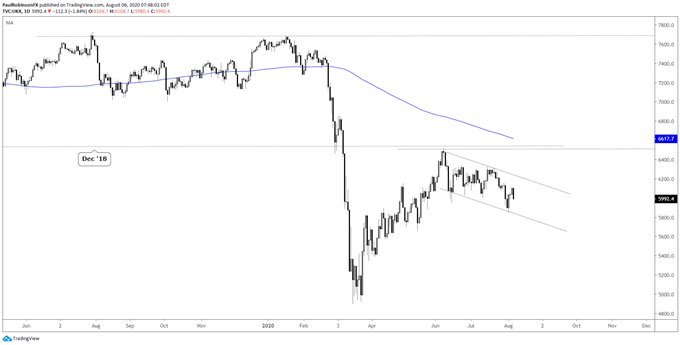 You can join me every Wednesday at 930 GMT for live analysis on equity indices and commodities, and for the remaining roster of live events, check out the webinar calendar.