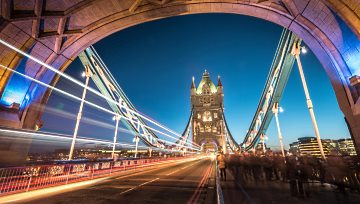 FTSE Testing Major Threshold, but Yet to See Rejection

Back on the 15th the FTSE cleanly broke key support surrounding the 7300-level, which was viewed as rather significant given it was not only horizontal support with numerous inflection points but also a confirmation of the double-top formation created between June and August and a drop below the 200-day MA. The break of confluence in support also resulted in a lower-low. The rebound since that break, including the boost received on Theresa May’s ‘Brexit’ speech, has the footsie firmly testing this once critical area of support (old support = new resistance). The high of Friday’s rally was notched almost precisely at the 200-day.

The past couple of sessions the market is struggling to overcome resistance as one would expect, but we aren’t yet seeing the type of rejection which is necessarily indicative of a continuation-move lower set to begin. Ideally, for shorts we want to see a firm rejection of key resistance before becoming aggressive. If we don’t soon see a move lower develop then another attempt to recapture 7300 may soon unfold. If it does, though, the market will still face the rising 200-day once again along with a trend-line off the 8/8 high. A break above the trend-line into the upper-7300s would be a solid recapture of resistance and we would be forced to once again view 7300 as support. 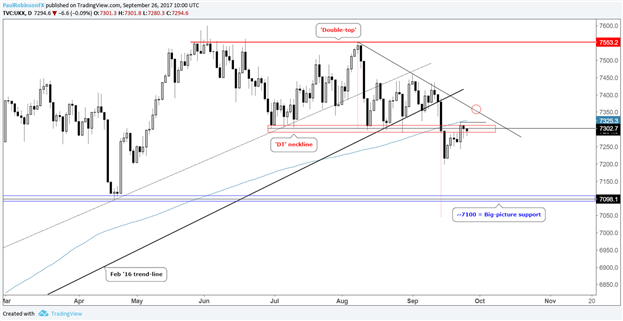 Dialing in closer to the hourly time-frame we can a bullish channel (possible ‘bear-flag’) developing. Even if the FTSE were to continue higher, poking its head above resistance, a break of the lower parallel of a matured ‘bear-flag’ would be our cue to look for a continuation lower. Whether we see a mature pattern develop or not, a break below 7242 would constitute a short-term lower-low and bring the daily swing-low at 7196 into play. From there, trade below that support level would likely bring into play the key long-term level at 7100. The double-top projected target lies lower near 7050, but our respect would be paid to actual price support and not a projected level.

Bottom line: Price action has yet to show us that the market wants to turn lower, which may be an indication it will recapture the 7300-threshold, but until it does we will respect its influence as resistance. The short-term time-frame may hold the key for making tactical moves should certain developments take shape.