The FTSE 100 has been a tough one to get a hold on over the past month. It starts to head for a breakdown below the increasingly important 7300-level, only to then reverse into the 7400s and find sellers. Round-and-round we go. It could be worse, it could be the Australian benchmark, ASX 200, which has gone into a bizarrely persistent range for nearly four months now. Anything is possible, but doesn’t seem likely we will see that with the footsie given the nature of large multi-national companies which the FTSE 100 is mostly comprised of. But the price action does beg the question, are you coming or going? (Breakout or Breakdown.)

At the time of this writing, the UK benchmark is trading below the February 2016 trend-line, which on a daily closing basis has held on several attempts to break below. If the market closes beneath, then pressure will once again be on support around 7300. The level, as we’ve discussed on several occasions, is quite important for keeping the outlook neutral at the least. A close below would constitute a triggering of the neckline of a double-top, drop below support dating back two-and-half months, and the 200-day MA. A slide to around 7100 would be the next likely move.

But until that happens, we’ll need to continue to hold a neutral outlook; can’t jump the gun just yet on being bearish. Support is support until it isn’t. What will turn the picture from neutral to bullish? A break above the recent range and sustained trade into the upper-7400s will be a good starting point. However, there is only a little room for trade up towards the 7550/600 area, where we could see the market once again struggle to gain traction.

From a tactical standpoint, giving the range the benefit of the doubt until broken, fading levels may continue to be the way to go. But as time elapses, traders will want to become increasingly careful with range-trading strategies as the likelihood of a sustained break increases.

We have a BoE meeting tomorrow; will this be a catalyst to help break the range? Perhaps, but the bigger price movement is likely to take place in sterling, and since the currency has had a diminishing impact on the direction of the footsie we may not see much reaction out of the index. 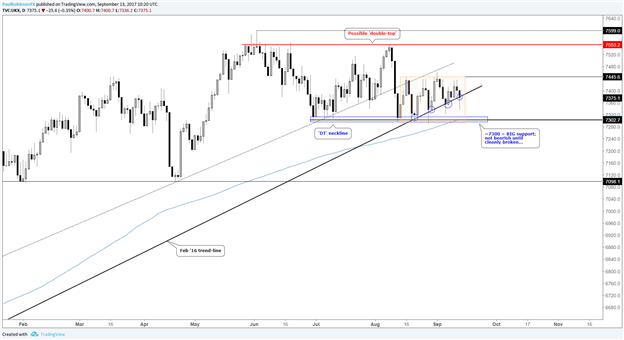