What’s driving the FTSE 100 and British pound? Find out in our market forecasts.

As of late we’ve been discussing the bottom and top-side trend-lines quite a bit, as the FTSE 100 finds neither enough buyers to push it through the upper barrier nor the selling interest needed to break support.

This week’s price action has consisted of the UK index rolling over from very near the January top-side trend-line towards the 2013-current t-line. It’ll be the first time the long-term trend-line has been tested in nearly a month. In May, the barrier turned into support and held on a single-day jab lower. Will it hold again? Well, it’s support until it isn’t. So while it may break, we need to first view it as a significant source of support. Several peaks dating back to February which are tied to this sloping resistance also form a pretty sound level of support around 7390. Between the trend-line and horizontal level we’re looking at a zone of about 7415/390.

A firm break below 7390 will expose the market to further selling towards the June (‘Brexit’) trend-line initially, and while not likely an immediate concern the February 2016 trend-line could come into play down the road.

If buyers show up at support, then the market will live to fight another day. But it will still remain stuck between those pesky trend-lines. We’ll still need to see a strong break above the upper slope and 7600 before the market can gain some real traction to the top-side.

In a few hours from now we have the BoE on the docket. While it is likely to move FX and rates markets with more force, if there is anything surprising to today’s outcome the FTSE could certainly be materially impacted. 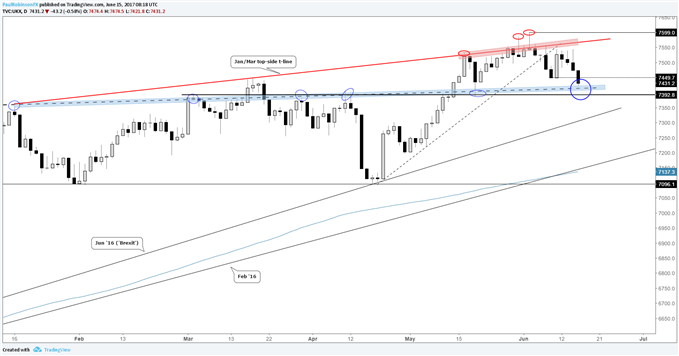