What’s driving European stocks? Find out in our market forecasts.

When we last specifically discussed the FTSE 100 it was on the day of the election, and heading into the ordeal the market was set up for lower prices. But going into an event of this magnitude leaning too hard in either direction was risky – the outcome proved that much.

So, where are we now? The market is caught between a rock and a hard place – focus remains on bottom and top-side slopes. Looking slightly higher, the January/March/current line has been a real problem for the UK index (double reversal events during the week before last showed us that much). We’ll continue to respect this increasingly important slope of resistance until the footsie can convincingly overcome it and the 6/2 record high.

On the down-side, the 2013 to present trend-line is likely to help keep a bid in place on a break lower (at least initially). The long-term slope held the market down from January to April, but then turned into a big source of support on a decline last month. The line currently clocks in around 7410. Just below there, the peaks & bottom which are connected with the trend-line will viewed as another solid source of support (~7393) should the market try and skate lower. We’ll call major support 7390/7410. It would require a stiff breakthrough for alarm bells to go off.

The trend is generally higher, and while risk sentiment is on semi-fragile footing at the moment we must respect the upward bias until we see a material shift in risk appetite. With that said, the FTSE might find itself bouncing around between support and resistance with continued lack of clarity before eventually coming to a resolution.

Heads up: An uptick in volatility may very soon be upon us – FOMC tomorrow, BoE on Thursday. See calendar for details. 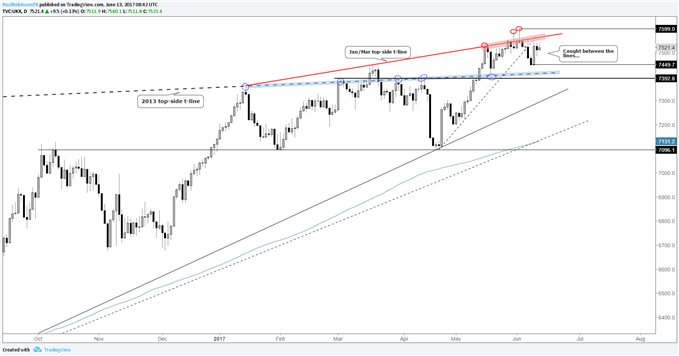