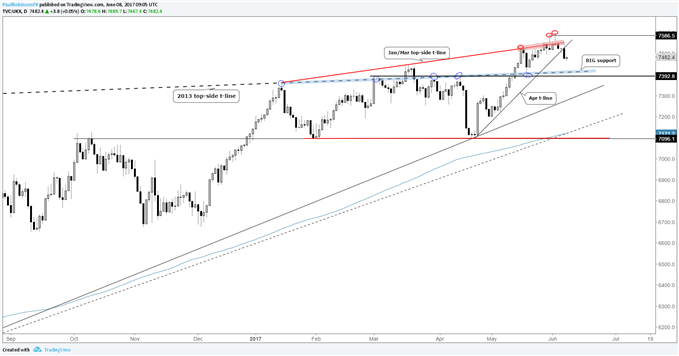 Looking for a longer-term view on the FTSE 100? Check out market forecasts.

On Monday, we were discussing the bearish implications of last week’s ‘twin reversal bars’ from the January to current top-side trend-line; the reversal events also resulted in a ‘perfect’ doji on the weekly chart. The only thing we viewed as keeping the market propped up was the April trend-line, which was undermined yesterday. The rejection at resistance and break of support has the FTSE set up for a move towards a big area of support around 7400; the 2013 top-side trend-line which gave the market fits from January to April and then support in May is viewed as rather significant. As we said on Monday, a break below there could bring into play a larger topping formation. We won’t delve into that until it becomes relevant.

So, the market is positioned for further losses, but…

There is this ‘election-thing’ going on today. Depending on the outcome the market may either want to rally or drop. How insightful. On this end, no speculation will be made as to what will happen, taking the usual reactionary stance to major events versus making a prediction. But, to that end it risk appears risk is skewed towards seeing a small rise on a Conservative victory and a large drop on a Labour victory/hung parliament. Right now, the market is positioned for the former not the latter, and if the market is correct, in the end this may all come and go with little drama.

A smallish pop in the market, given the currently bearish landscape, may end up being the best set-up for ‘would-be’ bears should it start to fade. Again, taking a reactionary stance over making any predictions. There will be plenty of time to take advantage of volatility once we know the outcome.