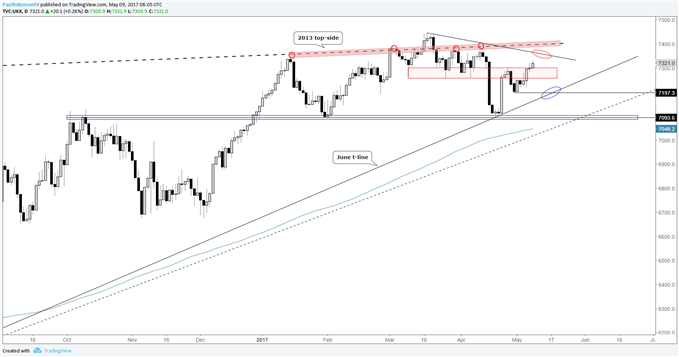 See what our analysts have to say about the FTSE and the expected longer-term impact from ‘Brexit’.

The FTSE 100 showed a limited response to the outcome of the French elections, which wasn’t surprising given the lack of strong price movement from the most directly impacted markets, the CAC and to a lesser degree the DAX.

Yesterday, the footsie popped its head above the range of resistance we’ve been keeping tabs on in the vicinity of 7255/300, eventually settling right around 7300. It’s been a tough spot for the market to overcome just as it was a good area of support during March and April. So far, this morning we’re seeing the FTSE make another attempt to push above the 7300 mark.

If it can sustain above 7300, the trend-line off the March high will quickly come into focus; this line lies just below an even more important area of resistance – the 2013 top-side trend-line (~7400), which has acted as a ceiling on several occasions since January.

Turning our focus lower, should attempts to break above noted resistance fail and result into a dive lower, we’ll be keeping a close eye on how price action reacts at the rising trend-line off the June low. Last week’s low at 7197 also falls in the same vicinity of the trend-line, so a confluence of support may bolster a bid upon trading down there.

The feeling on this end hasn’t changed – the FTSE’s lack of trend and levels in close proximity on the both the top and bottom-side leave us on the sidelines until further clarity presents itself.

Heads up: We have ‘Super Thursday’ this week; the BoE is set to release its decision on interest rates (no expected change), Asset Purchase Target (no expected change), and the release of the quarterly inflation report. Despite it being ‘Super Thursday’, one-week implied volatility for GBPUSD at a level of 7.18% indicates a lack of expected price movement following the central bank meeting. Given that the FX & rates markets tend to be more reactive to these types of events, we don’t expect the FTSE to react strongly. But as always, expect the unexpected. Always.