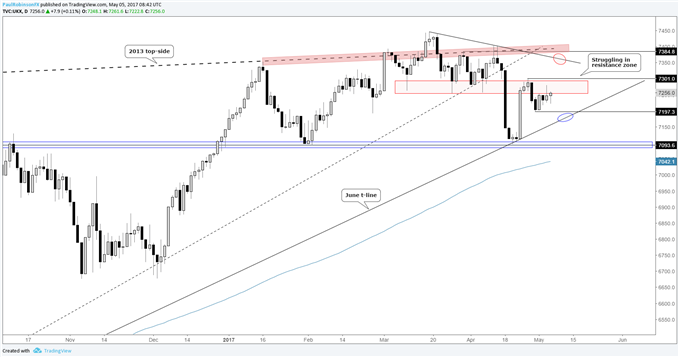 FTSE 100: Search for Direction Still On

See how our analysts see ‘Brexit’ impacting the FTSE 100 in our quarterly forecast.

The FTSE 100 remains stuck, for the week it hasn’t moved much. It’s moved about as much as the Nikkei 225 which hasn’t been open for business since Tuesday (on holiday until Monday). In the U.S., the S&P 500 hasn’t done much either as it continues to consolidate below the March 1 high. Elsewhere in Europe, though, we’ve seen the DAX and CAC make a run higher, but overall global equity market volatility is quite subdued.

Looking at the footsie specifically, we’ve been focused on support and resistance arriving within a somewhat close proximity to one another, and growing closer due to the rising nature of the June trend-line. The ~7255/300 area has kept a tight lid on any advances since last week, and if the market can’t soon get into gear a break below the weekly low at 7197 will lead to test of trend-line support. It hasn’t yet established itself as a trend-line of significant strength yet due to the lack of inflection points, but nevertheless it is still viewed as support. The truly big level comes in around the 7100 mark; a breakdown below there would be a rather significant event and put the 100 index in a precarious position.

If the FTSE can clear on through noted resistance and maintain above 7300, we’ll be looking to the trend-line running down off March record high and resistance near 7400 by way of the 2013 top-side trend-line.

Keep an eye on the pound, and while we try to view markets in a bubble (choosing to use correlations for risk management purposes more-so than arriving to conclusions), if recent strength continues it should weigh on the FTSE 100’s performance. Conversely, a drop would be a boon for the index. But overall, as it stands now, sterling looks more likely to appreciate than decline.

Heads up: Later today the US jobs report is due out, and could cause a spat of volatility. For details on expected figures, please see the economic calendar. This weekend we have the French run-off election between Macron and Le Pen, gap-risk for Monday morning is certainly elevated.