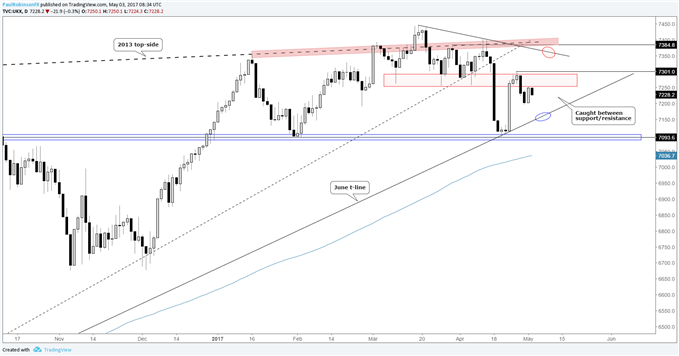 FTSE 100 in Limbo, Pound Not Helping

For a longer-term view on the FTSE 100, or another market of interest, see our quarterly forecast.

This is what we had to say on Friday in regards to the technical posturing of the FTSE 100: “We’re stuck between a rock and a hard place; not yet at support, but resistance looms overhead. Risk/reward from either side of the market is lacking, and on that the sidelines look like a comfortable place to be.”

Nothing has changed. The zone from ~7255/300 continues to act as resistance; yesterday’s high was 7254 and the market is turning down so far today. Looking lower, a break of the Monday low at 7197 will likely lead to a test of the June trend-line currently around 7155 and rising.

Risk appetite, globally, is healthy – the DAX is quietly consolidating in record territory, the S&P 500 is hanging out just below the March 1 record high, and the Nikkei 225 has even joined in lately with a strong push towards its best levels of 2017 (market closed for holiday).

And the FTSE 100? Not looking so healthy; ‘Brexit’ and British pound strength are at work here. The one-month correlation between GBPUSD and the FTSE is a statistically significant -71%. What’s good for the pound is bad for the 100-index given the majority of its constituents’ earnings come from outside of the UK; when profits are converted back into pounds these companies get a currency conversion boost. On this end, GBPUSD looks like it wants to continue to rise, and if that is the case then the footsie will be served no favors by the currency market.

Moving back to the technical landscape, expectations are for the market to continue to bounce around between beforementioned support and resistance before eventually coming to a resolution. A strong push above 7300 will bring the trend-line off the record high into view, along with the trend-line running overhead since 2013 (it’s put a lid on the market on several occasions since January). On the down-side, a break of the June trend-line will quickly bring the important 7100 area into play. A clean break below 7100 would be a rather bearish occurrence, especially if it is doing so without any downside participation from elsewhere in the globe.