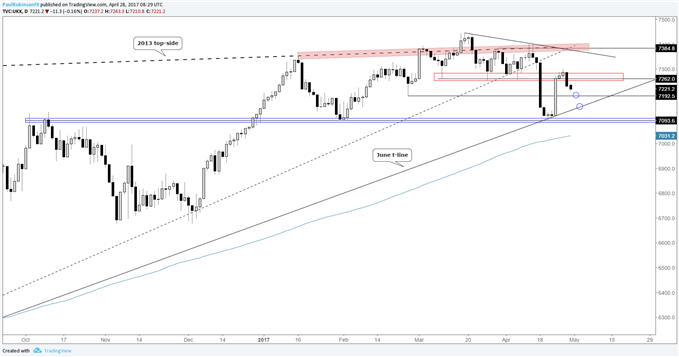 How is 'Brexit' expected to impact the FTSE, British pound? Find out what our analysts think in our quarterly forecasts.

Earlier in the week when we looked at the FTSE 100 we made note of resistance in the vicinity of 7255/300, and the thinking was that the index would push on through. But in line with the usual approach, it needed to actually to break on through to validate this view (we don’t buy resistance, as we don’t short support, either – good rule to live by).

The dip from resistance has the footsie heading towards a potential level of support near 7192, but the bigger focus comes in at the trend-line running up from the June low beneath last week’s low. It’s not yet a steadfast trend-line given it only has two connecting points, but if the market shows a response on a test, then we’ll add weight to its importance.

Looking higher, the footsie has clearly adhered to resistance surrounding 7300, so until the market can firmly climb above, it warrants a cautious stance from the long-side. A firm break beyond 7300 would clear a path towards the trend-line running off the March high and 2013 top-side trend-line which has been burdensome since January.

For now, we’re stuck between a rock and a hard place; not yet at support, but resistance looms overhead. Risk/reward from either side of the market is lacking, and on that the sidelines look like a comfortable place to be.

Paul conducts webinars every week from Tuesday-Friday. See the Webinar Calendar for details, and the full line-up of upcoming live events.