Can the rally in global equity markets continue through Q2? See our forecast for details on what’s driving markets.

Yesterday, we saw a sharp rally in global indices from Asia to Europe to North America as the outcome of first round of the French elections sparked a global risk-on environment. As we noted in the weekly forecast, the FTSE 100 ended last week on key support around 7100; which once represented the old high in October, but then became support during February. So far, so good as it holds again. There wasn’t much of a bounce from down there towards the end of last week, and without a significant catalyst it is unclear how this would have played out around 7100, but in any event the footsie is well off the important level for now.

From key support to key resistance. The rally easily surged through 7192, our first noted level of potential resistance, right on to the more notable area surrounding several swing lows created over the past six weeks. The low prices on three different occasions clock in between 7255/63, but closing values in the same area of these lows come in around 7280/300; we’ll call the resistance zone 7255/300. Given the surge off support and generally strong appetite for stocks, at this time it looks likely we’ll see a push on through.

If 7300 is clearly captured, on further strength we look to the trend-line running down off the 3/17 peak, in addition to a possible underside retest of the June trend-line. This would also have the FTSE back at the 2013 top-side trend-line which has firmly kept a lid on any further advance the market has attempted to put together since January. It would make for interesting confluence if all lines aligned. A bridge we’ll cross should we get there.

For now, momentum and general risk appetite suggest we will see the rally off support continue. A sharp break back lower, taking out much of Monday’s gains, would be a sign of caution and possibly put the brakes on the notion of seeing higher prices. 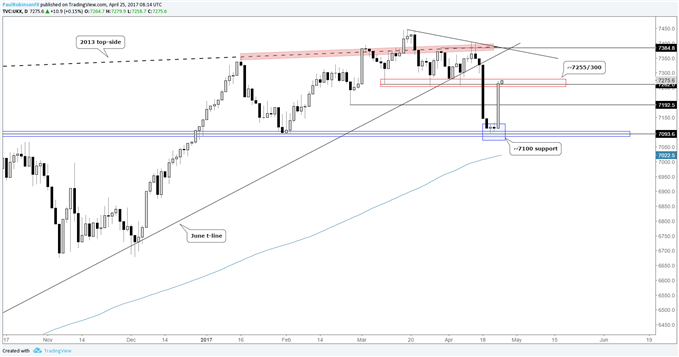 Come check out the commodities and equity indices webinar with Paul every Tuesday for up to date analysis on the DAX. See the Webinar Calendar details, and the full line-up of live events.