FTSE 100: Treading Close to a Breakdown

How will ‘Brexit’ impact the FTSE in Q2? Check out our equity markets forecast for details.

The other day when we last discussed the FTSE 100, we made not of choppy market conditions which are not only impacting the UK index but global indices as a whole. The June trend-line which held the FTSE up from day one of the month is coming under siege again, and given where the market is trading it could become especially important should it fail to keep a floor in place.

The long-term 2013 top-side trend-line we’ve discussed on several occasions in recent weeks is exerting a fair amount of pressure on the market (it connects the 2013 & 2015 highs). The footsie carved out two reversal days around this line this week, and marked the fourth time since it January it is has turned lower immediately upon touching the long-term barrier. It was only in the middle of March that the FTSE able to trade above for a brief period of time.

On Tuesday, we had this to say about recent price action: “The general shape of the chop-fest since the 3/17 high is that of a descending wedge, with the market starting to move higher from the consolidation pattern. However, we can’t yet fully rule out a possible head-and-shoulders pattern until the FTSE surpasses the 3/30 peak at 7385.”

While on Tuesday and Wednesday the market moved beyond the 3/30 peak, both days resulted in reversal bars and a failure to close above 7385. This keeps the possibility of a topping pattern in place, not necessarily a textbook ‘head-and-shoulders’, but whatever you want to label it price action is getting increasingly bearish. It could become a broader descending wedge, or perhaps no further pattern development at all.

In an attempt to keep things simple: We are centering our attention around the June trend-line and recent lows. A close below the June trend-line readies the market for a drop, with a close below 7263/55 expected to see increased selling pressure (neckline break). Because the market keeps failing to trade above the 2013 top-side trend-line, we will require a strong close above it (7400+) before we turn bullish again. 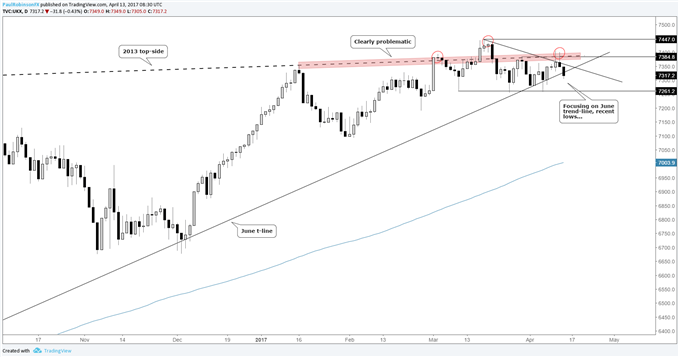