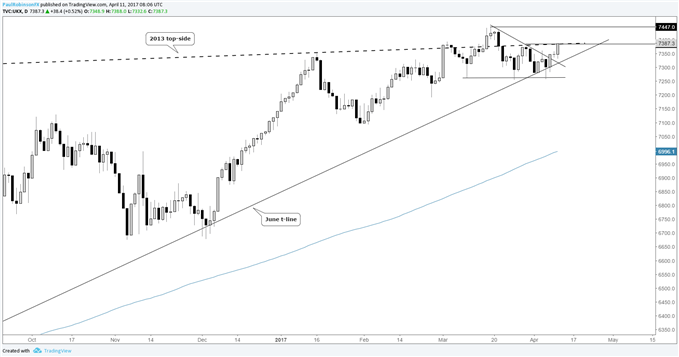 Join us for webinars conducted daily covering a host of topics including analysis, education, and coverage of fundamental events. See the Webinar Calendar for details.

The FTSE 100 hasn’t provided great directional indications recently, with choppy trading dominating the trading backdrop for global indices as a whole. With that said, though, the broader trend higher remains, and the UK index looks to be building a base for another push towards the prior record highs etched out in March. During the past week the footsie tested and held the trend-line extending higher from June, which is another bullish development and also creates a bit of a line-in-the-sand.

The general shape of the chop-fest since the 3/17 high is that of a descending wedge, with the market starting to move higher from the consolidation pattern. However, we can’t yet fully rule out a possible head-and-shoulders pattern until the FTSE surpasses the 3/30 peak at 7385. The bearish scenario in this form looks unlikely, just a possibility. A move beyond the 3/30 swing-high would also strengthen the bulls’ case with a higher high developing after a successful hold of the June trend-line.

There is a long-term top-side trend-line extending over from the peak created in 2013 and then across the 2015 high. Given how long-term it is we aren’t paying too much attention to it on a short-term basis, but it has clearly been a hurdle since January which needs to be firmly surpassed if the FTSE is to continue higher.

For now, we will continue to give the benefit of the doubt to the long-side and lean on the June trend-line as support.