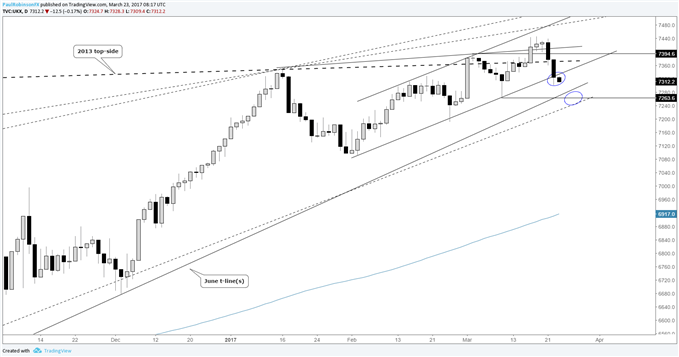 The title of Monday’s piece was, “FTSE 100 Remains Technically Sound”. Or perhaps not. The two days since the start of the week has brought the sharpest down-move since the January sell-off. The decline puts the footsie at an important spot, with the lower parallel off the Feb low on the verge of breaking. Should a drop below the lower parallel unfold, it doesn’t mean the trend has necessary turned down, but will quickly put to test trend support off the June lows. It would be at that point the market would need to show a response to support if it is to keep its bullish ways going. A decline below trend support would also carve out a lower low from the 3/9 pivot, a negative short to intermediate-term trend development.

As we said on Monday, keep an eye on other global markets, especially the DAX. It’s not that the German stock market holds the key for everyone else, but rather it’s about the technical clarity the DAX is presenting. The rising wedge formation we’ve been discussing finally broke to the downside, which suggests we will see a material sell-off develop over the near-term. U.S. markets broke hard on Tuesday as well, and the Nikkei looks the worst of the major markets we follow. Bottom line, a period of risk aversion looks to be upon us. And while the FTSE doesn’t present the clearest picture, the bias in general for global equities is one of caution to bearishness.