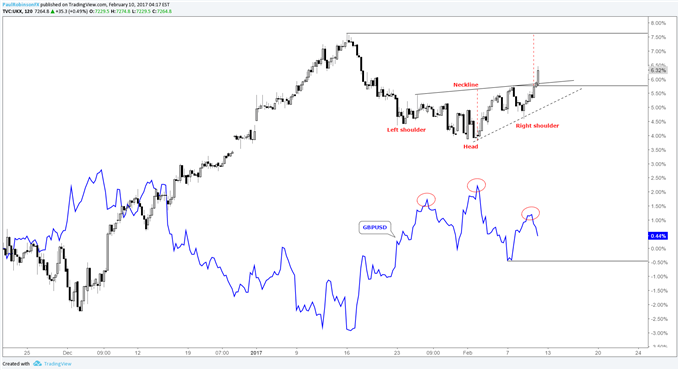 On Wednesday, we were discussing the potential for an inverse head-and-shoulders to come into play, but we needed to first wait for further development before calling it a valid pattern. After a little more back-and-filling the right shoulder of the formation developed and we’re now seeing a push higher well above the neckline.

Based on the depth of the pattern the measured move target aligns with the previous record high of 7354 from January. With the pattern in play the focus will be from the long-side until either the target is met or an invalidation takes place. To nullify the formation we would need to see a hard break below the neckline and a drop below the rising trend-line extending higher from the head. At that point the market may still have legs to move higher, but the integrity of the H&S will have been compromised.

Unsurprisingly, with the FTSE and GBPUSD sporting a strongly negative 1-month inverse correlation of -83%, the index and currency are posting mirror image patterns. We’ve been examining the footsie in a bubble, but keep in mind the traditional H&S pattern developing on the sterling front. It hasn’t triggered yet, but if it does it will very likely benefit the FTSE 100. The currency is a key driver here, but it also doesn’t hurt too that appetite for stocks, globally, is fairly healthy. The S&P 500 just ramped up to new record highs yesterday, the DAX is turning higher, and so have stocks in Japan.

All-in-all, we like the footsie to continue higher as long as it doesn’t turn and take out the pattern from which it just broke free from.