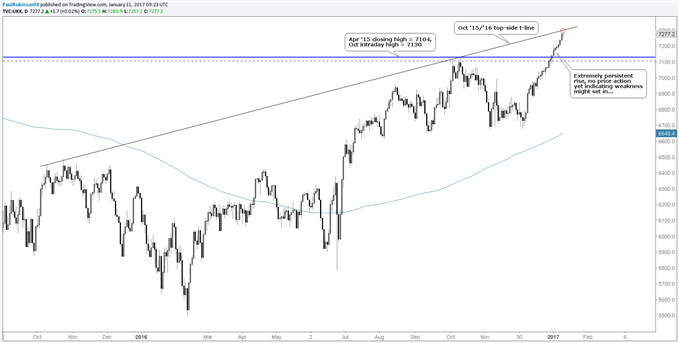 Our recent outlook for a pullback to spawn in the face of a persistently rising market has yet to be realized, but at some point, soon, the FTSE 100 is likely to experience a set-back. The trading has been so one-sided that the only way to enter long, for going on a month now, is to buy the intra-day dips and run with it from there. For those who have been long, there has been little reason to be a seller. For those looking to short, there has been even less of a reason to fight the trend.

In prior posts, we expressed our ‘hope’ of seeing a pullback develop following the breakout to new highs back into those old highs (old resistance becomes new support), for possible long entries. That is off the table for now. Fighting persistent trends is a tough game to play, but as we said earlier, at some point, a decline will set in. We want to see the market react lower first, showing selling interest, before considering a decline is possibly under way. One level of potential resistance where we might see the market react is just ahead at the top-side trend-line running over the October 2015 and ’16 peaks; this level is right around 7300. It’s a ‘hidden’ level of resistance, if you will, given it arrives at record highs.

Paul holds webinars at 10 GMT on Wednesday, Thursday & Friday each week. For details, check out the Webinar Calendar.