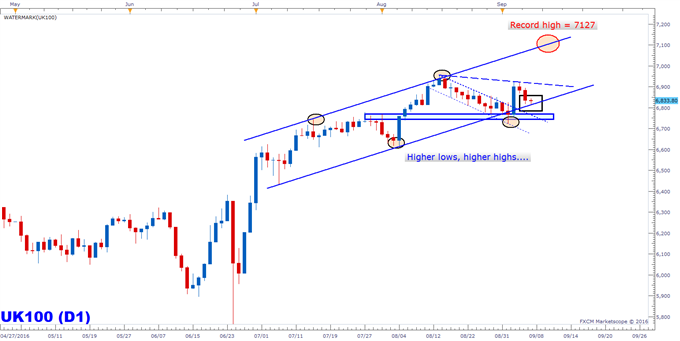 On Monday, we said the big 2%+ breakout out of the bull-flag in the FTSE 100 to end last week (with the help of weak US Jobs data) clearly put the path of least resistance in the longs’ favor. Since then we are seeing some backing and filling of that shot higher, which isn’t yet cause for alarm. In fact, the decline has brought the FTSE into a solid sloping level of support. The lower parallel extending back to early July is a good spot to see the current decline come to a halt and for buyers to show up.

The general trend structure remains bullish, with the markings of higher lows and higher highs. Global risk sentiment remains buoyed from Asia to the rest of Europe to the U.S., as well, which helps support the case for higher prices in London.

In the short-run, we would like to see the FTSE hold the lower parallel and turn higher, but if it should sink below the lower parallel not all is lost; it will require a break below the 9/1 low at 6722 to put the trend in jeopardy of breaking. As long as the lower parallel holds, and it should do so today/tomorrow, then we will look to a minor top-side trend-line off the 8/15 high as potential resistance in the near-term. A break above that line and the Friday high at 6929 will quickly expose the August high at 6956 and increase potential for a larger breakout, creating another significant higher high. A new high opens up the path towards the upper parallel currently in the vicinity of 7100 (upward moving target), which is also near the April 2015 record high at 7127.