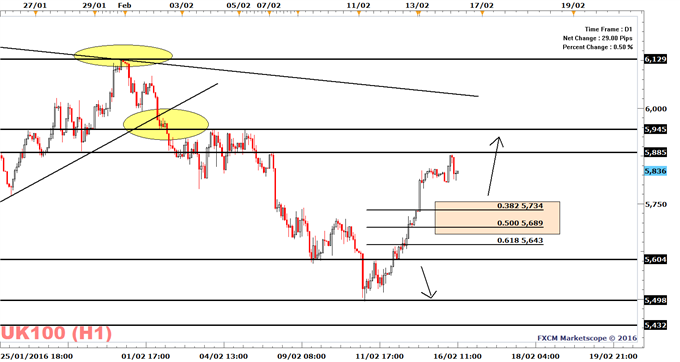 The FTSE 100 (FXCM: UK100) is slightly higher today (+0.60%), but traders are hesitant to lift it even higher as the risk/reward ratio for fresh long positions at current levels is not good following yesterday’s strong gains.

Instead, a pullback to the 5734-5689 range is needed to make the potential reward beneficial given the risk. If the FTSE indeed bounces from the 5734-5689 range, I would expect a new test for the February 8 high of 5885. A break to the 5604 level will probably however end the short-term bullish trend and trigger a decline to the current yearly low of 5498.

From a multi-week perspective, I see the FTSE 100 as bearish below the January 29 high of 6129 and the short-term bullish trend described above is only expected to last a few days.

German sentiment is deteriorating as the ZEW Expectation Index dropped to 1 from 10.2 in January. While this did beat the 0 expected, an ever declining ZEW expectations index tends to result in a lower DAX 30, which is bearish for the FTSE 100 given its correlation to the German Index.

The next data point on tap today is the U.S. Empire Manufacturing Index at 13:30 GMT, with a Bloomberg Survey projecting an outcome of -10.50, from the shocker drop of -19.37 in January. It is indicators like this one that continue dropping to recessionary levels, which are keeping the long-term trend of the FTSE 100 in downward form. The FTSE 100 was also dragged lower by soft commodities.