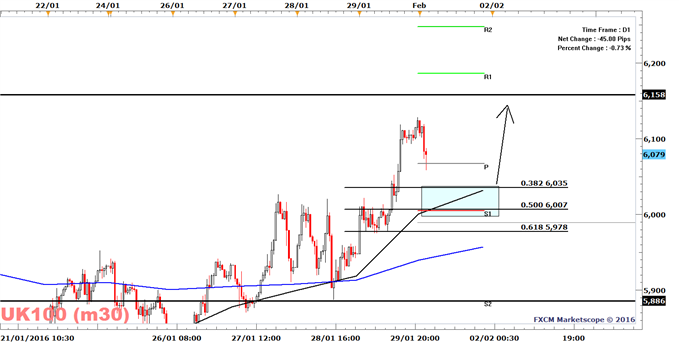 After last week’s strong run, the FTSE 100 is giving back some of its gains. The strong gains in commodities and the Bank of Japan reducing rates to negative are both supporting the FTSE 100 and are expected to underpin strength in the weeks ahead.

However, in the short-term, the mixed China PMI figures which were published overnight are enough of a motive to book gains, but the generally overbought conditions could also be said to be helping trigger a softer FTSE 100 this morning.

According to my short-term fair-value-model, the FTSE 100 rose more than was justified by commodity markets (Bloomberg Commodity Index) and by the DAX 30. Both markets suggest that the FTSE 100 should be trading at 6016.5.

In the near term, I would expect the index to pull back before heading higher, primarily given the reasons mentioned above.

The January 28 low of 5886 is the last swing low of importance for the short-term trend, and traders will probably opt for a long position on a pullback as long as the index trades above this level.

The 6035 to 5978 range will probably be seen as a zone to add to bullish exposure as the risk/reward ratio is more favourable here. Last week’s breakout level of 6026 was also within this range, as well as my fair-value model estimate.

Given the severe slowdown in the U.S. manufacturing sector, the ISM Manufacturing Index will probably be today’s (and potentially this week’s) most important data point for the FTSE 100. A Bloomberg news consensus poll projects an outcome of 48.5 from 48.2 in December. A rise or stable outcome is probably needed for traders to buy the FTSE 100 on dips. More key data is on tap like Core PCE, which is expected to rise by 1.4% YoY from 1.3% in November. This indicator is key for the Fed in formulating their monetary policy, with a strong rise increasing the likelihood of further rate hikes while a soft reading would increase delays. For a complete overview of today’s reports, please see our calendar.