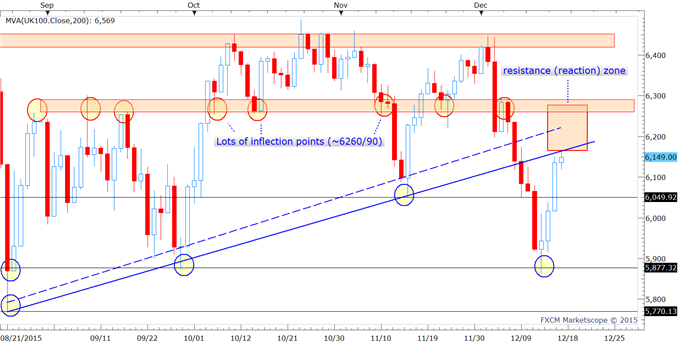 Yesterday, the Fed acted as anticipated by raising rates 25 basis points to 0.5% with a dovish tone to the policy statement. In the absence of any curve balls US stocks responded quite positively after making a couple of sharp, liquidity-driven knee-jerk reactions. US indices closed just off the highs of the day, dragging the FTSE 100 futures up with them. This marked the third consecutive day the FTSE rose since finding its footing around support carved out during the late summer swoon and September retest.

The drive higher now has the index squarely facing resistance in the form of trend-line support broken just over a week ago. Given the sharp bounce since Monday it should not be unexpected to see the FTSE struggle in the 6160 – 6220 area in the near-term. Should it take out both degrees of trend-lines it is unlikely the UK index can rise above the 6260/90 vicinity without sellers putting up a strong fight given the hefty number of prior inflection points.

For the nimble, looking for a reversal in upward momentum in the resistance zones outlined above offers potentially rewarding short entries with the confidence of knowing where reference points lie for measuring risk. Even if a turn lower doesn’t materialize into a full-blown sell-off, probability is high we will soon see a pullback at the least. If you have been holding a long position, resistance levels heed caution and one can offload the entire position, part of the position, tighten up trailing stops, or a combination of the latter two actions.

It is in any type of retracement which unfolds where we can gain valuable information as to what our next course of action should be. Does price action suggest it is only a constructive pause before trend resumption or a reversal? In this case, a gradual decline back into the sharp rise suggests the former, while a sharp turn down indicates higher probability of the latter.

Trading the outlined scenarios can be trickier than may seem at first glance, for help with honing your skills in taking your analysis to the point of execution you may want to check out – Traits of Successful Traders.