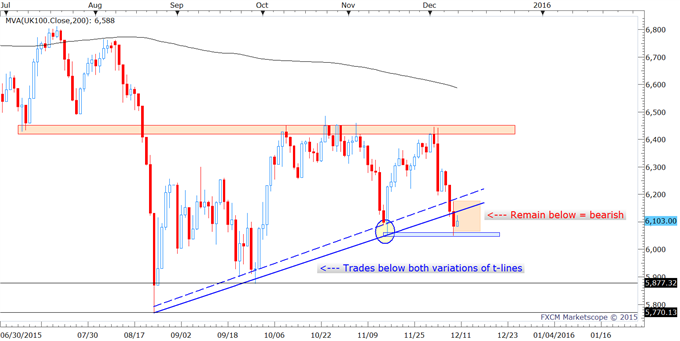 The FTSE 100 has been one of the most poorly postured global markets for some time, and while other indices rallied from the August lows into early November, and in some cases the rallies extended to almost December (DAX/Nikkei), this was not the case for the FTSE. Shares of commodity-based companies have been a significant culprit in the FTSE’s underperformance which has led to it failing on multiple occasions since early October above the 6400 mark. It now sits only a a couple of strong down days lower away from nearing the key lows created during late summer, early fall. That's weakness.

The most recent and pronounced failure above 6400 came on the back of European stocks trading sharply lower on disappointment following the 12/3 ECB meeting. During the past couple of webinars I discussed trend support rising up from the ‘Black Monday’ low. That trend-line was to be trusted until broken. It’s broken. This places the FTSE in an even more precarious position moving forward, making it a preferred target for short sellers.

Once key technical levels are breached what I like to watch is the subsequent price action – how a market responds to a sharp move or key technical event can be a great tell. If UK stocks can’t muster a rally following the break of trend support, then the break will be validated. Ideally, from a short’s perspective we want to see the FTSE bounce and fail a retest and/or consolidate/build a ‘bear flag’ in the coming days below slope support. This could offer up a nice set-up for ‘would-be’ sellers. However, if the index manages to climb strongly back above the trend-line then we will be forced to consider the alternatives.