At one point the yesterday the S&P 500 was selling off with more force than it had in a couple of months, but by the end of the day it had recouped a large chunk of its losses. Had the selling held or worsened by the sessions end, it could have spelled more trouble ahead, at least in the short-term.

But with the market holding the upside remains intact. It would have been ideal to see the March trend-line hit, but it doesn’t need to be tested to keep things moving along higher. There could still be a test coming in the absence of strength following yesterday’s reversal.

To turn the picture bearish, we will need to see a drop below the March trend-line and recent congestion pattern low at 4118. In the event this happens a broader decline could unfold. Looking to the top-side, continued strength may be a bit of a grind. First up as resistance is last week’s record high at 4218. From there nothing substantial. 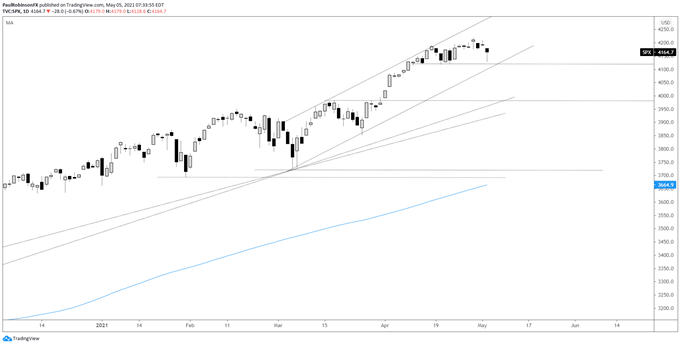 The Dow Jones has been in a sideways consolidation pattern for almost three weeks. Yesterday we were seeing some aggressive selling early to the bottom of the range, but the Dow recovered to close in positive territory.

This has the index set up to rally on a breakout above 34256. On a breakout it will be important to see price hold above the breakout level and not immediately fail. If it can hold above then the outlook will remain bullish.

But if we see an immediate failure back inside the consolidation, given the generally extended nature of the market, risk will quickly climb that a false breakout turns into a sell-off. To confirm this we would need to see a break back inside the pattern and drop through the floor of the congestion pattern at 33687. 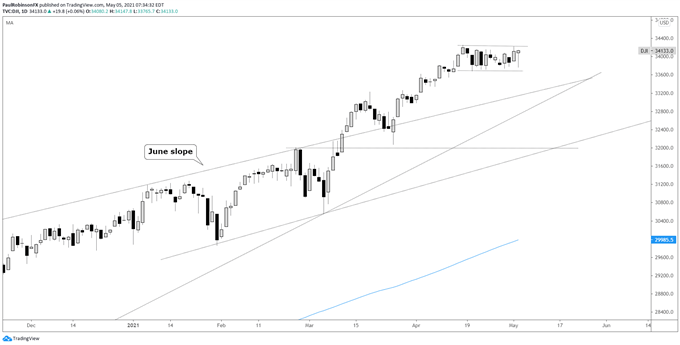 The Nasdaq 100 is the weakest of the big three indices, falling below the recent floor at 13716. But in doing so it tagged the trend-line from the March low. Even if we were to see a break below the March low there is horizontal support not far beneath right around 13300, and just beneath there is the March 2020 trend-line. This generally leaves the NDX well supported.

Looking higher, the first level of resistance clocks in at 13716, then from there the old high at 14073. Despite the Nasdaq 100’s weakish price action, the dip may have ended or be very near ending before another rise to a record high. 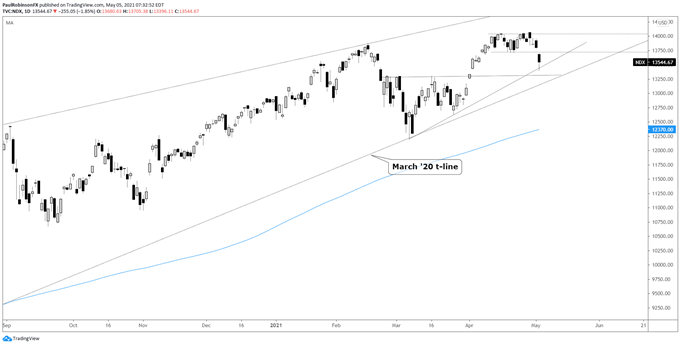