The S&P 500 is slowly rolling overafter notching a new record high just last week. With the market below the prior high in February, the next level of support to watch is a trend-line and slope rising up from last year.

The two lines both lie within the vicinity of 3815/800, and have the potential to forge a higher low in the broader uptrend. But with the way the NDX, in particular, is looking (see below), a larger sell-off could be underway towards the 3700 area and worse.

The Dow Jones has been the leader as old school value stocks have been outperforming new school growth. There are a pair of top-side trend-lines that the Dow recently breached to reach new record highs, but it is now failing back below these lines. These top-side trend-lines make up what is becoming a potentially explosive wedge situation, where the March trend-line acts as the lower threshold of the pattern.

If the recent crossing over the top of the formation continues to fail towards a decline below the underside trend-line, it could be constituted as an “overthrow” that signals an exhaustion in the trend. In the event we see the March trend-line broken we could see a rather sharp decline unfold. 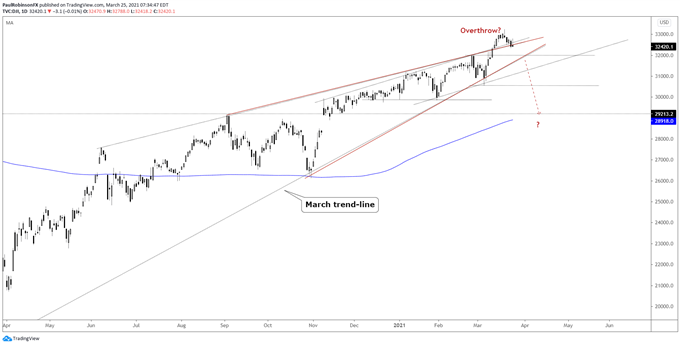 The divergence between the S&P 500/Dow and the Nasdaq 100 suggests vulnerability at the very least in the tech sector, if not the entire market. The Nasdaq 100appears to have posted a meaningful lower high scenario that will lead to a new cycle low in what may only amount to a corrective pattern, but possibly worse.

A decline to a new low would likely have the 200-day in play along with the lower part of a developing downward channel. This would imply a decline to the 11900/700 area. This roughly aligns with the weekly log chart channel we’ve been watching the past few years. The top-side trend-line was once a strong level of support until the NDX rose above it last year, when it then flipped to a source of support. A test of the upper band (~11500/700) will be an important bull market test.

To turn the picture around in the near-term, we will need to see a close above what is currently being viewed as the lower-high, which resides at 13312. 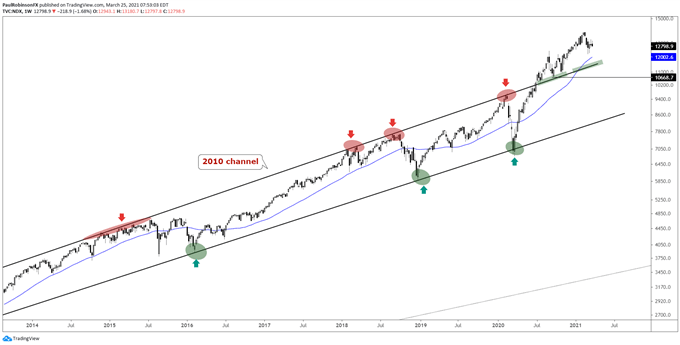