The S&P 500 hasn’t been the most exciting market to participate in, as even though its trending higher it isn’t doing so in rip-roaring fashion. But this certainly doesn’t mean the trend isn’t strong, as steady upward price action dominates.

The steady price action has created a robust upward channel that keeps the bias neutral at worst to higher. As long as it stays within the confines of the channel or breaks out above the top of the channel this will remain the case.

It would take a breach of the lower parallel and some support beneath there right around 3650 to turn the bias towards the possibility of a correction. For now, sticking with the channel as a bullish guide until price action indicates it’s prudent to do otherwise. 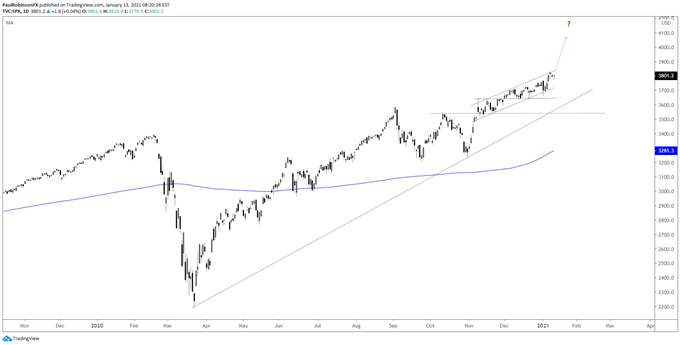 The Dow Jones is on a slightly different path than the S&P 500. It is sitting out of a bull-flag formation that is set up to lead to another leg higher. Even if price were to drop lower out of the small multi-day consolidation, as long as it isn’t sharp, the outlook remains positive.

The lower parallel of the pattern around 30k is viewed a support, with 29881 (Jan 4 low) also holding importance. Stay above and the near-term outlook remains neutral to bullish. Resistance comes in by way of a top-side trend-line extending over from the June high. It isn’t viewed as a significant form or resistance given it is running with a strong trend, but nevertheless is an obstacle that needs to be overcome to keep the index moving along.

The Nasdaq 100 continues to trade higher within the confines of an upward channel similarly to the S&P 500. From my view, to turn things negative we would need to see a breakdown out of the channel and below the prior high in September at 12439, along with a breaking of the March trend-line that is in confluence with that previous record high. Otherwise, staying the course.

A large chunk of the NDX’s weighting is concentrated in just a few stocks, FANMAG (FB, AMZN, NFLX, MSFT, AAPL, GOOG), and these stocks have generally been moving sideways the past few months. If this group can go on the move again, it is likely to cause an outside move (up or down) to develop in the NDX. Right now, the digestion period is viewed as a consolidation within the uptrend, but could turn out to be a distribution top. In general, it is a good idea to keep an eye on them for further indications given their ~40% weighting in the NDX.