The S&P 500 took a hit yesterday on coronavirus fears, but most of its losses were wiped away quickly as was the case on other occasions when negative headlines hit the market regarding the virus. The trend remains firmly higher and with positive end of the year seasonality it appears likely stocks are headed higher.

There is support around the 3630/35 mark where yesterday’s low in the cash session formed. This was a reversal high from November and a smallish high and low that formed over the past month. The bottom-side of an upward channel also comes in around this support line.

It’s hard to say how high the market can go should it rally, but risk/reward at this time favors continuing to work from the long-side until we see clear signs that the market is reversing course. Perhaps we see a rally become extended into January that offers a reversal opportunity, but until such price action unfolds shorts hold little appeal.

The Dow Jones is grinding its way higher, and while it appears it losing momentum it could just as well be nearing a point where it launches higher out of what has amounted to a few weeks of consolidation. A break down below 29568 would be reason for caution, with risk turning towards the March trend-line. Otherwise, not seeing a good reason to turn negative on the Dow.

The Nasdaq 100 is in position to rally strongly again if its leading group of stocks break out of the triangle formation they have been stuck in for quite some time now. FANMAG (FB, AAPL, NFLX, MSFT, AMZN, GOOG) has built a nice triangle pattern that is arriving at the apex in what could be a timely run-in with Santa.

A breakout here soon could drive the Nasdaq 100 considerably higher. Watch for a downside break-out, fake out then reversal higher (a common characteristic of tightly coiled triangles). A breakdown could also spell trouble, but at this time seen as the lower probability scenario. 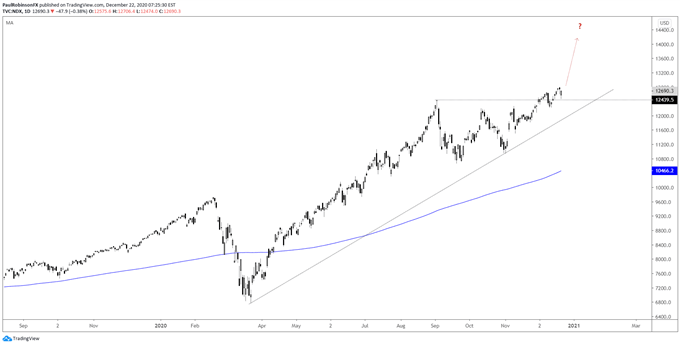