The U.S. stock market continues to trend in record territory, tacking on further gains to its incredible run starting back in March. The Nasdaq 100 hasn’t been the leader here of late, but that could change if the developing triangle pattern in FANMAG leads to a rotation back into the tech sector.

Taking FANMAG (FB, AAPL, NFLX, MSFT, AMZN, GOOG) and combining it with TSLA you have nearly half of the weighting of the entire NDX, which means that if the group wants to run so will the NDX, and by extension the S&P 500.

The triangle is an impressive one that began with the top in September. Time is now running short before price runs into the apex of the formation and leads to some form of price expansion. A breakout to the upside is seen as most probable given the trend prior to its development and general tone of the market.

The height of the pattern suggests a measured move of 20%, which could roughly add another 10% or more on to the NDX from where it is today. That would have the index near 14k, and given the way these stocks move it may only be a matter of a few weeks before we see those lofty levels.

On the flip-side, should the triangle break down (seen as a lower probability even at this time) then it is possible the NDX run gets derailed. We’ll visit this scenario should it begin to come to fruition. 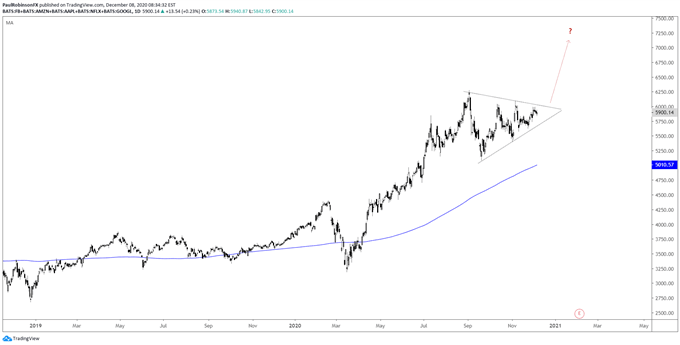