The global recovery led by the US stock market is at risk as important resistance levels have been in play and momentum is starting to turning down. The S&P 500 may not be in for a massive decline, but a sell-off of size could be underway.

Looking lower, the 2798 and 2727 levels are up first as horizontal support, which if broken could lead to a more sizable sell-off that takes back half or more of the rise off the March low. Even if the market were to try and trade higher right here resistance from 2950 up to 3000 is looking firm.

More broadly speaking, there is potential in the coming months for a monster topping pattern to come to fruition, but keep in mind this will take some time, and the neckline of the head-and-shoulders formation in question will need to be broken to validate the sequence. But nevertheless given all that is going on it is a development to keep a close eye on. For right now, price action appears ready to favor sellers for the foreseeable future.

The Dow Jones has an intriguing short-term price sequence to pay attention to here as a RST/Megaphone pattern is underway. These patterns are built as a result of increasingly larger swings (growing instability) that eventually resolve themselves. If a lower low beneath 23361 occurs then the anticipation is for stocks to sell-off, with the Dow potentially filling the 4/3 gap at 21054.

Should the Dow firm up and rally it will still need to deal with the underside of the 2016 trend-line and gap from March 6/9, with the biggest portion of resistance around 24900. For now, the path of least resistance is looking lower, but will need to get a confirm on a break of 23361 before running with a more aggressive bias. 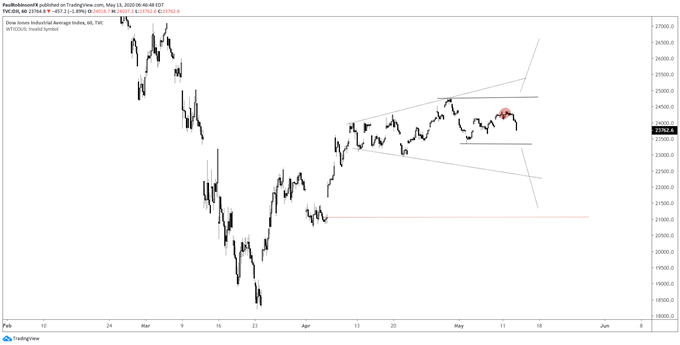