The run in US equities, and specifically of late the tech-heavy Nasdaq has mostly defied gravity. Bad news means nothing, good news means rally. It's a bull market. Whether it's a bubble or not, we'll leave that discussuon for another day.

But the run in the Nasdaq (and broader market by extension) is quickly approaching an important test. The mostly orderly ascent has taken the Nasdaq to the top of a bullish channel that began developing many years ago.

It just so happens that the top of the channel also coincides with 10k.

Psychological levels can be a real thing, but it is better in my opinion if they are accompanied by some other type of technical threshold, as is the case here. The upper line of the channel is where the Nasdaq stopped in January 2018 before “Volpocalypse”, and again it acted as a wall in August of the same year before it fell over 20%. It just so happens that the underside line of the channel was also the low of the correction.

The channel dating back nearly a decade highlights the orderliness of the bull market. It’s quite impressive, really. It has been a guide for some time now that keeps the bull market pointed higher, but also at times it has provided important inflection points to operate off of. Like now.

As the Nasdaq approaches the top of the channel (& 10k), things could get (more) interesting, perhaps even ‘crazy.’ The recent rush higher has a bit of a euphoric feel to it (i.e. Tesla of late). It suggests we could be nearing a tipping point (correction), and what better spot for that to happen from than a threshold that has already proven its weight?

Watching price action closely here. A tag of the upper crust and sudden rise in volatility and weakness will be strong signals that the market wants to continue to abide by the neat structure it has created for itself over the years. It could be soon after tagging the ‘upper crust’ that shorts will, for a while at least, gain the upper hand.

However, if we see the market break on through to the other side it could very well quicken its pace as the orderly rally turns disorderly, creating an “overthrow”. Overthrows are simply when price leaves the confines of an orderly technical structure and extends in extreme fashion. In this case, a parabolic price move. If this happens it is anyone’s guess as to how high the Nasdaq goes. It would, though, seem likely that it would be the final hurrah before a significant top is created.

Long story short, the days/weeks ahead could turn out to be an important inflection point for the foreseeable future. 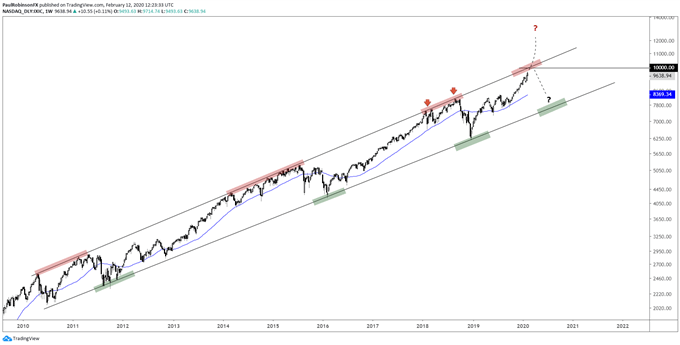