S&P 500 dip so far has been constructive

The S&P 500 underwent a little weakness last week, but nothing at all that suggested the market was in for more than anything other than a constructive dip before moving higher. There could be a bit more weakness before doing so, which would be more ideal for providing a better risk/reward opportunity for would-be longs.

A decline down to the January 2018 trend-line could offer such an opportunity. In the event we don’t see a gradual pullback to that point, a little more base-building around current levels would also give longs a stronger backing for another rally into fresh record highs.

To turn the market on its head a strong break will be needed. In the absence of a such a wave of selling, it’s going to be difficult for shorts, perhaps through year-end as seasonal forces continue to help an already strong market.

The Dow Jones Industrial Average is a little closer to the January 2018 trend-line, and could test it without the S&P 500 testing its own identical threshold. A test of the trend-line could make for a stronger backing, but the way the market has been moving, a very shallow, horizontal correction may be all we see. A little patience here may serve best in allowing time for a stronger base to build.

Nasdaq 100 holding up on a top-side trend-line

The Nasdaq 100 remains mostly suspended in air like its sibling indices. It does have a line of support at its feet right here, however, which is thus far giving the NDX a little backing. The line in discussion is from the April top, crossing over the July high. The market skated on support the first couple of weeks of the month before getting some separation and gravitating back to it last week.

A hold here above 8226 will keep support well intact, a move sideways on it a bit more, like with the other indices, would do some good for loading the canon for another shot higher. Should the April line break, then watch the one running over from the September 2018 peak across the July high. The outlook will remain neutral to bullish as long as we don’t see a sudden, large break. 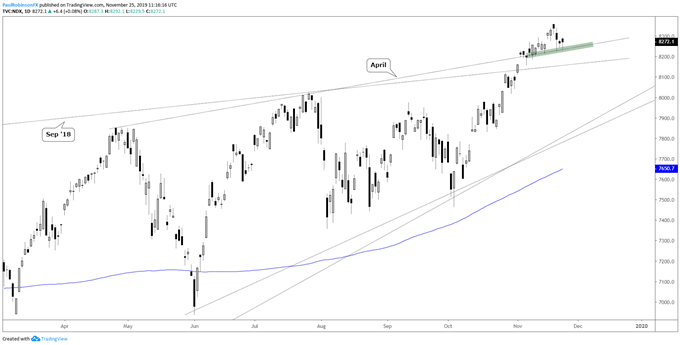 To learn more about U.S. indices, check out “The Difference between Dow, Nasdaq, and S&P 500: Major Facts & Opportunities.” You can join me every Wednesday at 1030 GMT for live analysis on equity indices and commodities, and for the remaining roster of live events, check out the webinar calendar.