The good news for the S&P 500 and Nasdaq 100 is that they both broke out to new record highs, the not-so-good news is that new highs haven’t held for all that long after being notched. Additionally, these indices are at or very near resistance that has been problematic, just as recently as the summer, so another decline could soon be near.

The line of resistance the S&P faces could quickly become a damper. The top-side trend-line coming over from January 2018, also constituting the top of a large Reverse Symmetrical Triangle (‘RST’), or ‘Megaphone’, is within 20 handles of yesterday’s close.

The key for would-be bears will be to watch for a break in upward momentum, instead of trying to fight the trend and find a top. The last time the S&P was up against the top-side trend-line was July when the Fed first cut rates, could this week’s FOMC meeting bring a similar outcome as the central bank is expected to again cut rates by 25 bps? 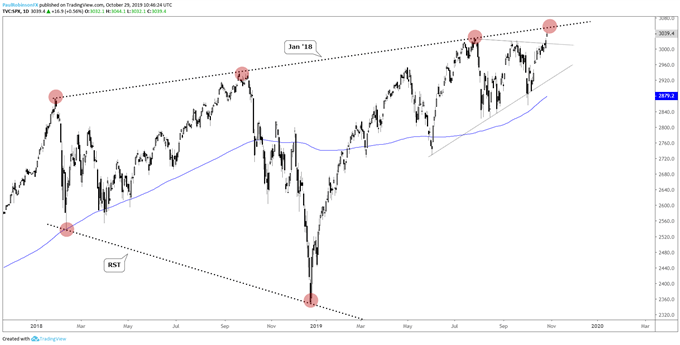 The Nasdaq 100 broke out to a new record, and with that it is up against the top-side trend-line running over from the September 2018 high, a line that connects with the July peak. It’s not the cleanest pattern, but a rising wedge is also on the table from last year as well. There was already a false break, last month, of a variation of this pattern, so we will want to tread lightly on a breakdown of this pattern without seeing some strong confirmation from the NDX and other indices.

The Sep ’18 line could be a problem, and if not there is another one just above rolling higher off the April peak. This could make for part of another smaller rising wedge formation. Could, could, could – some doubt on these patterns, so best to wait for something concrete.

For now, it is a good thing that the NDX is participating to new highs, but FAANG is still lagging behind, the leading group of stocks in this index – Facebook, Apple, Amazon, Netflix, and Google aren’t acting like the bull market darlings they once were. You can throw Microsoft into the fold with them. The divergence may change, but it could be a sign that investor appetite has diminished, like we have seen in small-cap stocks.

FAANG vs NDX Daily Chart (can it catch up?)

The Russell 2000 is a small-cap index, and as such the companies in the index is composed of are considered higher risk. Small divergences between large and small cap stocks aren’t uncommon, but the one in place since last year is very difficult to ignore. It suggests that risk appetite has indeed waned significantly, and is unsupportive of a sustained run in the broader indices without there being more bumps, if not worse, a longer-term top. In the near-term, as the S&P 500 is up against a top-side trend-line, watch how the Russell takes on the trend-line running down from May.

The Dow is still sitting inside the wedge pattern we discussed last week, and if the market rolls over a bit from here it could continue to fill out the formation. It may still end up breaking out to the upside, but then again, the divergence the DJIA is showing could be yet another sign of a deteriorating backdrop for stocks. Like the S&P 500, the Dow also has a large ‘RST’ pattern building since the peak in January 2018, but will take some time and price weakness to bring into play.