The VIX Index is approaching multi-month lows in the wake of the September Fed meeting where the US central bank announced its second interest rate cut of the year. The latest monetary policy update from the Fed has sent market volatility plunging after a subtle remark by Jerome Powell lulled traders as it was interpreted that the FOMC will soon recommence asset purchases and expand its balance sheet (i.e. resume Quantitative Easing). Fed Chair Powell stated that “it is certainly possible that we will need to resume the organic growth of the balance sheet earlier than we thought.”

The comment sent stocks in the S&P 500 on a near-vertical rebound from an aggressive intraday selloff that began right after the FOMC rate decision was released, which was accompanied by uninspiring revisions to the central bank’s economic projections. Correspondingly, the VIX Index – a measure of 30-day implied volatility on the S&P 500 – whipsawed back lower as Wall Street’s favorite fear-gauge took a massive blow on hopes of aggressive monetary policy accommodation from the Fed. 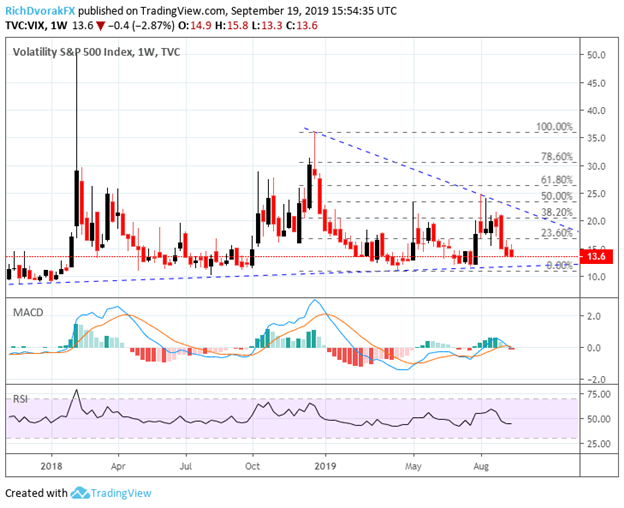 The popular volatility benchmark now trades at its lowest reading since late July and recent price action suggests more downside could be ahead for the VIX Index. A sharp drop in market uncertainty earlier this month on reports of thawing US-China trade war tensions sunk the VIX below confluent support provided by the 23.6% Fibonacci retracement level of its trading range since last December. Sustained declines in the VIX Index has driven the MACD indicator to roll over and RSI back below 50 on the weekly chart. Yet, when looking at volatility from this broader perspective, an overarching uptrend becomes apparent judging by the series of higher lows since late 2017. As such, the VIX Index holding above the July swing low around the 12.00 handle will serve as a constructive development for volatility to return back toward its long-term median reading of 17.5.

When looking at the daily chart, a moving average “death-cross” of its 50-DMA and 200-DMA is revealed, which also points to recent bearishness. The MACD suggests that the downtrend is waning, however. Although, the 14.00 handle and 78.6% Fibonacci retracement level of the VIX Index’s trading range since July as well as the short-term downtrend line extended from the September 10 and September 18 intraday swing highs stand as serious obstacles for a sustained rebound in volatility. 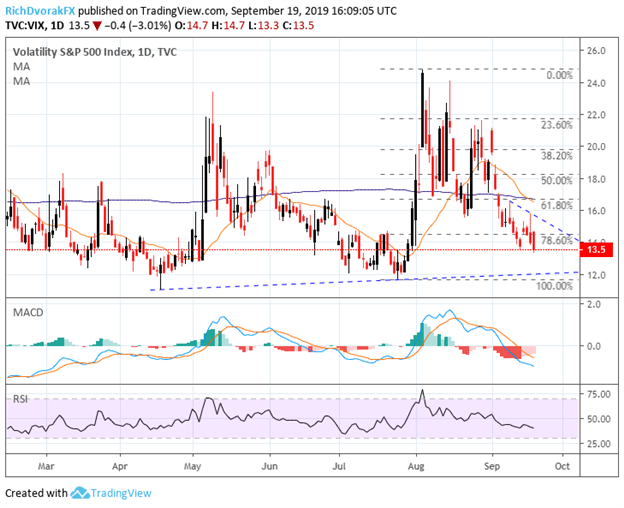 Meanwhile, the S&P 500 Index trades less than a percentage point away from printing fresh all-time highs as ballooning hopes for looser monetary policy bolsters stock prices. Though, if the S&P 500 is nearing record highs, why is the Federal Reserve providing accommodative monetary policy? Fed officials balk at the idea of an impending recession, yet Chair Powell just stated again how “it can be a mistake to try to hold on to your firepower until a downturn gains momentum.” At the same time, several economic indicators suggest that the current business cycle expansion is on its last leg.

That said, investors are increasingly at risk of growing complacent so long as the dominant downside risks to global GDP growth and economic outlook – like the US-China trade war – remain unresolved. Investor complacency is also evidenced by the fact that the latest Fed official median forecast for the 2019 and 2020 Federal Funds Rate (FFR) sits at 1.9%. The target FFR range currently sits at 1.75-2.00% and suggests that FOMC members see its policy interest rate unchanged through the end of this year and all of next year, which compares to the market’s pricing of an additional 50-basis points of cuts over the same time period. Alas, we may be entering a brief period similar to a “calm before the storm.” While volatility may be nosediving and stocks may be surging for now, the misalignment between monetary policy outlook from the Fed versus what is priced in by traders will eventually converge. 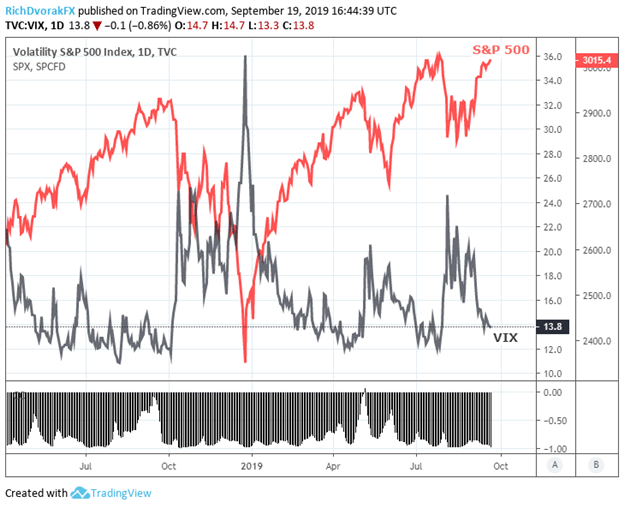 Either way, it will likely prove to be destabilizing for risk assets like the S&P 500 and positive for volatility. Two bellwethers I am keeping close tabs on to track these potentially destabilizing developments, aside from President Trump’s twitter account, include the US Treasury yield curve to measure recession risk and the Chinese Yuan to gauge the US-China trade war. Even despite the recent positive rhetoric between Beijing and Washington, spot USDCNH is still fluctuating comfortably above the “taboo” 7.0000 price level, which suggests Sino-American trade relations remain tense.

Also, the 2s10s spread, which measures the difference between US Treasury yields on the 10-year and 2-year maturities, has barely moved out of inversion territory. In other words, the VIX Index and S&P 500 appear “out of touch” with intrinsic value as market participants overlook downside risks surrounding the US-China trade war and future Fed policy decisions. In these instances, patience (as opposed to FOMO trading) may prove to be a prudent approach to the current market conditions as another destabilizing development is simply a matter of when – not if.

Still, the path of least resistance over the near-term may be lower for the VIX Index before the next major catalyst that reignites US-China trade war tensions or undermines hopes for further Fed policy accommodation, which stand to send volatility surging back higher and the S&P 500 swooning back lower.