Nasdaq 100 Technical Forecast for the Week Ahead

Nasdaq 100 Technical Forecast for the Week Ahead

The Nasdaq 100 enjoys a strong technical standing compared to its S&P 500 and Dow Jones counterparts but remains in a precarious position nonetheless. After its recent trough on August 5, the tech-heavy Index has posted a series of higher lows but has been unable to surmount resistance around the 7,775 level. Consequently, an ascending triangle – albeit gradually sloping - has formed. Typically viewed as a continuation pattern, the formation of the triangle could mean the Nasdaq is destined to expand upon the losses that created the trading pattern in the first place. 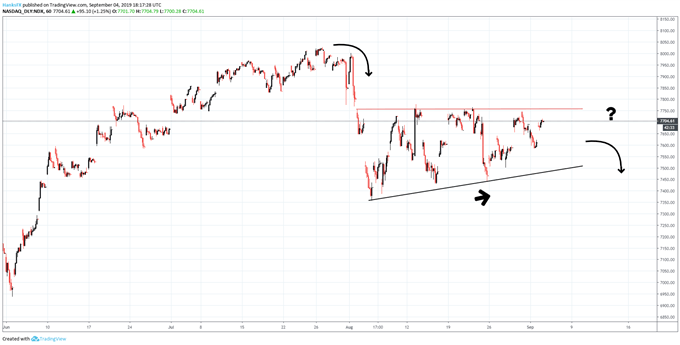 Although the NDX remains in a broader uptrend, the price action that resulted in the triangle was an abrupt and bearish move lower. Thus, the continuation signal could suggest the NDX is headed lower once more. Further, the repeated inability to break the 7,775 level does not speak to conviction amongst the bullish community. Given the height of the triangle at its origination, a break below could see the Nasdaq fall as much as 400 points which would conveniently coincide with the June low near the 6,950 area.

While there are undoubtedly arguments to be made for bullish bets, prolonged uncertainty on the fundamental side could see the Nasdaq slip and the S&P 500 and Dow Jones deepen their historically negative returns in September. In pursuit of predicting the next move, traders will devour information from Thursday's ISM services data and Friday’s US non-farm payroll report which could have serious implications if it reveals a weakening employment environment. In the meantime, follow @PeterHanksFX on Twitter for updates and technical analysis.