Last week it was noted that the rising wedge in the S&P 500 was a focal point but needed a convincing break before it could be validated as bearish. The gap on Monday was mostly taken back, however, yesterday that reversal was wiped out with force. This has the S&P firmly outside the formation and looking lower.

The initial target for these patterns arrives near the bottom of its formation, but before arriving at that point the 200-day and a minor swing-low show up around 2775. This leaves a solid 100+ point move until the widely-watched MA is reached. The bottom of the pattern doesn’t arrive until the 2720s, but first we will want to see the market’s reaction to the 200-day should it reach it.

To negate the breakdown, we will need to see some solidly bullish price action and time is likely needed to repair such a break. It’s possible it was a head-fake but given the extended nature of the market and the fact the formation tipped off around the old high suggests it probably wasn’t. For now, running with a bearish trading bias until otherwise.

Dow Jones looking at 200-day as next level

The lagging Dow should reach its 200-day quicker on further selling in equity markets, it only needs to trade down to 25409 to do so. Beyond that support level, next up is the swing-low from March 11 at 25208, which would be an important level to watch as a break below would constitute a lower-low in the upward sequence off the December low. For now, just looking for the long-term MA to get tested and taking it from there…

Dow Jones Daily Chart (200-day looks to be next) 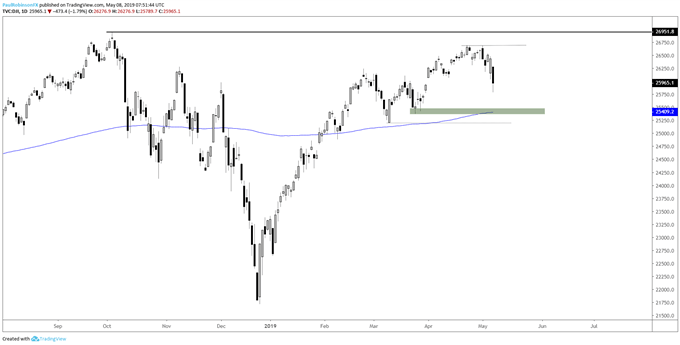