On Tuesday, the S&P 500 tried to sneak out of the top of a rising wedge formation but found itself settling back inside it the past couple of sessions. This comes right at the prior record highs and makes for quite the confluence between the apex of the wedge and resistance.

The squeezing nature of a rising wedge after an extended rise can lead to a sharp move in either direction, however; it might not be clean at first with a fake-out taking shape first. The key is to run with an initial break but be prepared to switch gears in the event a fake-out happens.

If a breakout to a new record occurs watch for the possibility of an immediate stall, and if not then the 3k-mark will be targeted; it isn’t just a psychological level, right in that vicinity a trend-line crosses over from the January and September peaks.

A break of the underside of the pattern, given the pent-up pressure and market leaning strongly long, could lead to a quick rush lower as losses on recent purchases begin adding up. Again, watch for a fake-break but run with the initial breakdown and adjust if need be on a reversal back higher.

In either event, how the next couple of sessions plays out has potential to be significant. 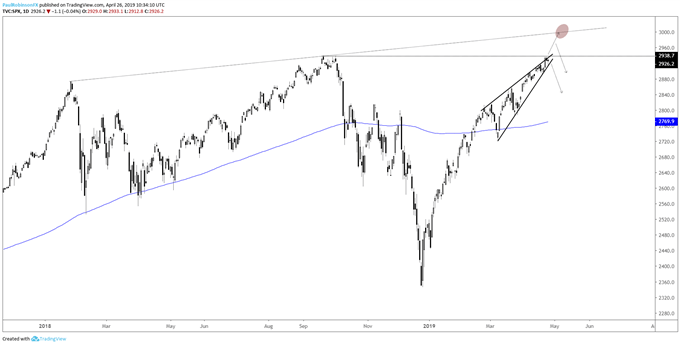 The Dow had its own version of a rising wedge develop along a trend-line from the December swoon low, but with yesterday’s weakness it is now trading outside the pattern and below the trend-line. It doesn’t mean the trend has changed of course but does undermine it for the moment. If it can’t quickly recover and continues lower in the days ahead then likely the S&P is also trading down out of its rising wedge and ‘risk-off’ may be the name of the game. Initial support clocks in at 26062 while resistance at 26696, followed by the record high at 26951.

Nasdaq 100 at record high but extended

The Nasdaq 100 is trading in record territory but price is quite extended, making it vulnerable to a set-back. With the stock market’s propensity to break to new swing highs, or in this case new record highs, and then undergo a small correction at the least, risk isn’t very favorable for fresh longs and existing longs may want to consider using trailing stops on short-term positions. Shorts aren’t yet favorable as bearish price action is lacking.