Traders are reacting to the uptick to volatility, to see how check out the IG Client Sentiment page.

On Monday the market was headed for a breakdown below recent support towards the year-lows before reversing sharply to close slightly in the green. The key-reversal was a solid form of rejection and suggests the market may want to trade higher.

A close below support is the key here, and as long as the S&P 500 maintains above the Monday low at 2583 then focus shifts higher. Not looking of a rip-roaring rally, but rather a modest move higher towards the trend-line off the record high, November high at the very highest. The broader bias is still lower, but with the tail-end of the year near that may be staved off until we get into a new year. 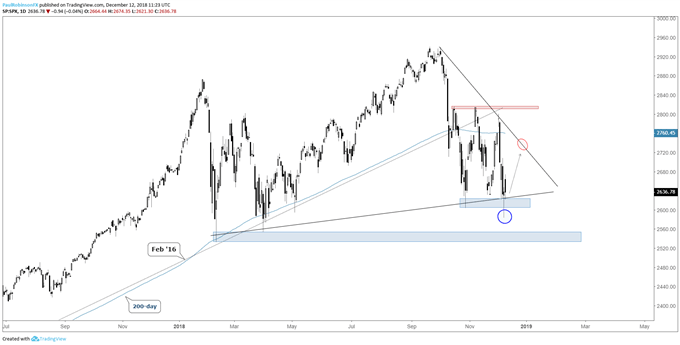 On Monday, the Dow broke several forms of support from trend-lines starting in February 2016 to February of this year to Oct/Nov lows, but selling was reversed to post a clean key-reversal candle. Yesterday we saw some selling after the gap, but just as long as the Dow doesn’t sink below 23881 we could see a modest lift in the near-term. Resistance clocks in at the 200-day running through just below 25100 and then there is the trend-line off the record high, followed by what is viewed as a best case scenario of reaching the Nov/Dec highs.

The downside leading Nasdaq 100 has been a small bright spot of late as it didn’t trade to a lower low with the other two major indices, and for the most part held in positive territory Monday while the S&P 500 and Dow were off by a considerable amount. As is the case with the other two indices, the trend-line off the record highs will be in focus as resistance, followed by highs over the past month, the 200-day and underside of the Feb 2016 trend-line. A break below 6442 will bring in further carnage and a test of the year lows but seen as a lower probability event for now.