For longer-term trading ideas, forecasts, and a library of educational content, check out the DailyFX Trading Guides

Yesterday, stocks again acted like they didn’t care that rates are going up, but once again rolled over into the close after the FOMC announcement/press conference. Last week, we noted that dips were favored on mild pullbacks, but with momentum as strong as it was the notion has been put on the backburner for the moment.

With strong pressure coming down on the June trend-line risk of it breaking it is high. A break will have 2886 up first as minor support, with major support clocking in around 2873/64, the January record high and bottom of the most recent pullback. Trade down to that point would be rather important for the market to hold if it is to keep its bullish sequence of higher highs and higher lows in order since the spring. 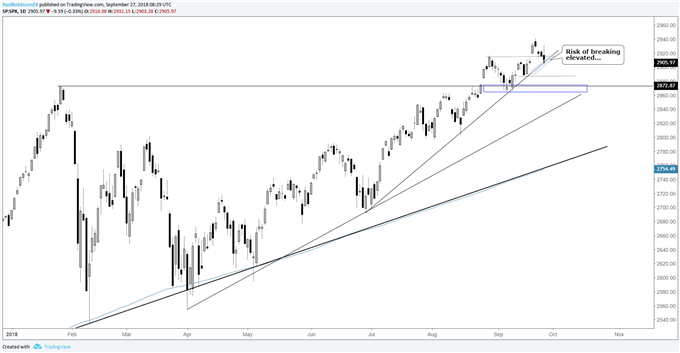 The Nasdaq 100 continues to sport a broad bearish rising wedge on the weekly time-frame, which if broken suggests a significant decline could get underway. So far it has only made a feeble attempt at breaking it and as such kept a strongly negative bias at bay.

There is a sequence building on the shorter-term time-frame which could lead to a strong break lower. The NDX has been carving out a ‘head-and-shoulder-ish’ price sequence since last month, with a clear line-in-the-sand (neckline). Support is strong, marked by the relatively powerful turnabouts on a few occasions this month, the most recent arriving on Monday’s gap-down reversal. It is to be treated as support until broken, offering a sort of last stance for longs.

However, if a breakdown occurs it could spur a good amount of selling and push the NDX firmly lower out of the broader rising wedge formation. This would likely get stocks as a whole rolling downhill. It’s just a scenario for now, but one worth watching in the days ahead.