S&P 500 and Dow rising from support

The recent dip in the market was once again been met by buyers, with the record high from earlier this year and the trend-line off the June low providing the S&P 500 with support. For the Dow, it was 25800 and top of the ‘RST’ pattern providing it with it with support.

These will remain key near-term focal points on any weakness from here and respected as support for as long as they hold. It won’t take much for the S&P 500 to keep on keeping in record territory, and the Dow, which has been lagging other major U.S. indices, may finally make a move on a new record soon. 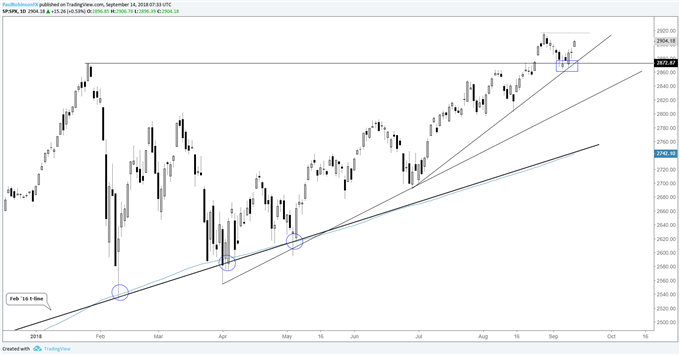 The “trend is your friend” despite other concerns

Last week we discussed a few situations brewing which could derail the market, but have so far meant nothing. We first noted the bull market darling led Nasdaq 100 index and its potential to decline out of a bearish rising wedge, but despite slightly undercutting the bottom-side trend-line of the pattern, sellers failed to emerge. This keeps the NDX still in OK shape as long as it doesn’t roll down below 7400.

The fact several other major global markets have been weak was also reason to believe we were on the cusp of a broader decline, but this factor, too, has so far been only isolated and without meaning for the S&P. The DAX and FTSE falling to multi-month lows may be a macro sign later on that the backdrop for global stocks is weakening and will be meaningful, but not right now.

September into October is known to be a seasonally weak time of the year for stocks, but this as well has yet to matter. Until the market starts to roll over and break support levels, these things might be warning signs, but won’t matter until they do. Respecting the trend and support levels will keep one out of trouble from getting overly caught up in these potential problems.

We recently put together a piece recently highlighting the differences between the three major U.S. indices – ‘Difference Between Dow, Nasdaq, and S&P 500: Major Facts & Opportunities.’. Check it out to learn the varying characteristics one should know if you are going to trade them.