S&P 500 Price Analysis – Wary as Highs Near, Dow Struggles to Keep Up

S&P 500 is a stone’s throw away from record highs, Dow lagging

The difference a week makes. Last week we were looking at a bearish short-term configuration that if selling took the S&P 500 through support it would likely open up room for more selling, but instead the area around 2800 led to a strong push higher.

The rally the past week has the S&P staring down new record highs on a move over 2873, but as the case has been for some time, buying new swing highs hasn’t been a particularly fruitful approach. Instead, it’s been waiting for dips that have paid. Yes, we are talking about the record high, not just an ordinary swing high, but even then, in the past the market has had a perverse way of ebbing just about the time all looks to be in the clear.

However, just because a cautious view is warranted on longs (new longs in particular), it doesn’t mean shorts are necessarily warranted at this juncture. Perhaps a volatile turnabout in price action around record highs will, but not until then, and even then, it’s a play for the aggressive. For now, risk/reward isn’t particularly great for either side of the tape. 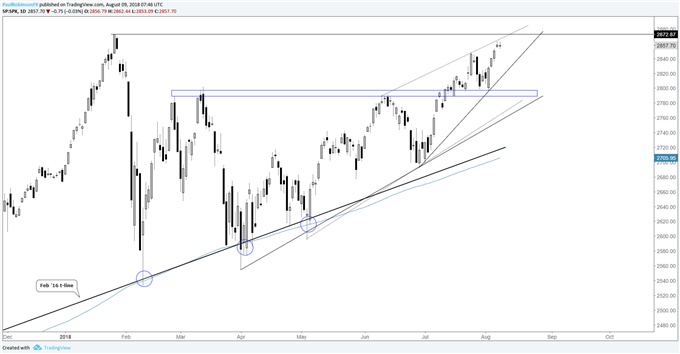 The Dow is operating a bit differently here as it sits right around 4% from the record high, lagging the S&P 500, Nasdaq 100, and the Russel 2000. As the S&P approaches a new high the Dow could soon contend with the peak of the February bounce at 25800.

If we see price action become volatile in the indices here soon, the Dow looks like the best of the bunch to pick on from the short-side. But even then, again, shorting this market in the absence of a clear risk-off theme is for the more aggressive-minded trader. It's also August, and barring downside risk, price action could be a grind...

We just put together a piece last week highlight the differences between the three major U.S. indices in this piece, ‘Difference Between Dow, Nasdaq, and S&P 500: Major Facts & Opportunities.’. Check it out to learn the varying characteristics one should know if you are going to trad them.