For longer-term trading ideas, Q3 forecasts, and a library of educational content, check out the DailyFX Trading Guides.

S&P 500 close to best levels since early February, new highs not far away

In recent webinars and posts, we’ve been discussing the precarious positioning of global equity markets, with the S&P 500 looking headed for a fourth test of the Feb 2016 trend-line/200-day combo, and it’s higher than usual likelihood of a failure should the test take shape.

Staving off those concerns was last month’s ability to narrowly escape the test, finding buyers before the major dual trend support could bring the longs’ resolve under fire. The turn higher has us in a bit of a summer rally mode, and with a breakout above 2802 the potential to see the old record high at 2872.

A breakout above the early February level won’t assure an easy ride to new highs, though, if that is where we’re indeed headed. This time of year, minus any real fireworks (so far trade war fears have only brought spats of volatility), can bring a lack of excitement, or summer doldrums.

If we are to see a rise in volatility market participants will need a good reason to go on the scramble, and the breaking of the aforementioned bull market threshold would probably do the trick. Until then, though, the market may not go into rip-roar mode, but it looks headed to at least maintain a bid.

Dow Jones has a broad triangle in the works, lagging behind

The Dow Jones remains a laggard, as both the Nasdaq 100 and Russell 2k lead the way among other major U.S. indices not called the S&P 500. The Dow has been coiling up since the top in January, and while it’s not the clearest pattern in terms of symmetry (one can even make the case for a wedge starting in late-Feb, too), the contraction in price action suggests the market may go through an increasingly quiet period before making a break for it. 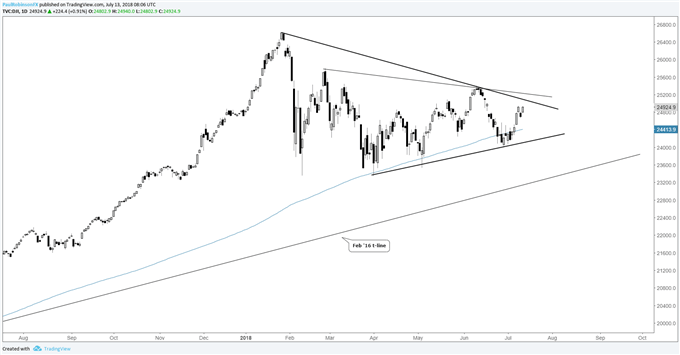