For longer-term trading ideas, forecasts (Q3 about to be released), and a library of educational content, check out the DailyFX Trading Guides.

Last week, we were discussing the precarious positioning of the S&P 500 (&Dow), and since then things have become a lot more precarious. Not to sound like an alarmist, but later this year we may look back and determine this time right now to have been the most important of the year.

Running up from February 2016 lies a trend-line that is in confluence with the 200-day MA. These technical thresholds and confluence are viewed as highly important for a couple of reasons. For starters, the Feb ’16 trend-line connects the low of the last material bull-market correction back in 2015-16 with the low carved out just prior to the pivotal U.S. presidential election in 2016. Trend-lines that have connecting points around important events typically hold high value.

Secondly, the 200-day MA is an important one for equity markets, especially the U.S, and given there are so many eyes on it further weight is added to its importance. You join the already important trend-line and the widely-watched long-term MA and you have a very strong confluence of trend support.

Why the next test is so important. We have seen the confluent support tested three times already since February, making this fourth attempt in the span of less than five months a big one. There is an old rule that says trend-lines repeatedly tested in a relatively short period have a high likelihood of breaking, and often times the fourth attempt is where probability really climbs.

However, before we go thinking the market is about to go careening off a cliff, we will, in consistent fashion, give support the benefit of the doubt for the moment. But should support get broken decisively then it may not be long before lows carved out from Feb-May break with relative ease as the market shifts from wobbling bull to full-on bear.

Seasonality is also favorable for market weakness from now into October, which could make for an alignment of the stars, if you will, for a big support break and strong downdraft in stocks. Or, we could see another test passed. In any event, the days and weeks ahead are likely to prove very pivotal for the now and later…

Rising volatility shaking your confidence? Check out this guide for 4 ideas on how to Build Confidence in Trading. 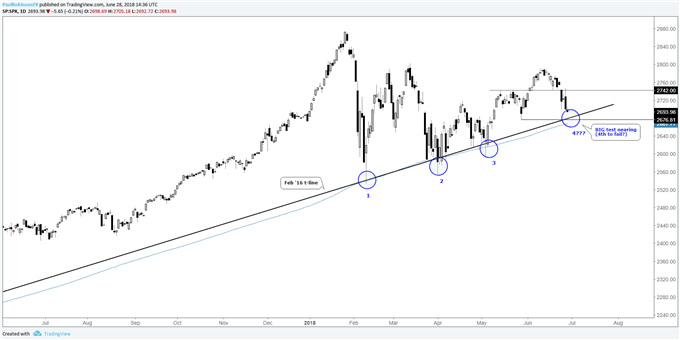 Our primary focus on broader market direction is the S&P 500, but obviously, if it goes so will the other indices. The Dow is flirting with leaving behind the 200-day MA as it closed just below it yesterday, but still has substantial support below. Bottoms from Feb-May along with the February 2016 trend-line make for a big area to hold (or break).

For live weekly updates on the DAX and other indices (& commodities), join me live on Tuesdays for ‘Indices and Commodities for the Active Trader’.